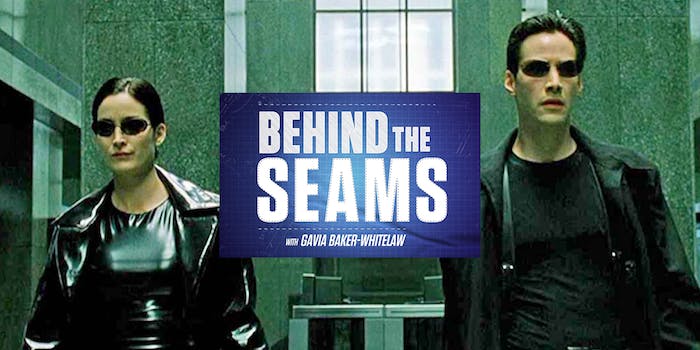 More than twenty years after its original release, The Matrix still feels thrillingly fresh. Taking inspiration from anime movies like Ghost in the Shell, it’s a revolutionary work of action cinema. It also boasts incredibly distinctive visual design, particularly in terms of costuming. While films like Star Wars and Lord of the Rings draw direct links between their costume choices and sci-fi/fantasy worldbuilding, The Matrix‘s costumes are purely designed to look cool—a sleek, gothic style that blends cyberpunk trends with fetish imagery. It’s no surprise that they immediately spawned dozens of Hollywood knockoffs like Underworld and Equilibrium.

In this week’s Behind the Seams video, we dig into the backstory and impact of The Matrix‘s costume design, ranging from the film’s comic book influences (The Invisibles) to its roots in 1990s goth culture. These costumes work on multiple levels, from the superficial impact of Neo and Trinity’s outfits (they look so cool!) to the way the film uses different fabric textures to make its action scenes as visible as possible.

In each episode of Behind the Seams, we explore a different element of cinematic costume design, whether that’s a deep dive into a specific movie like Mad Max: Fury Road, or an examination of a popular trope like Disney princess ballgowns. Click here to subscribe!