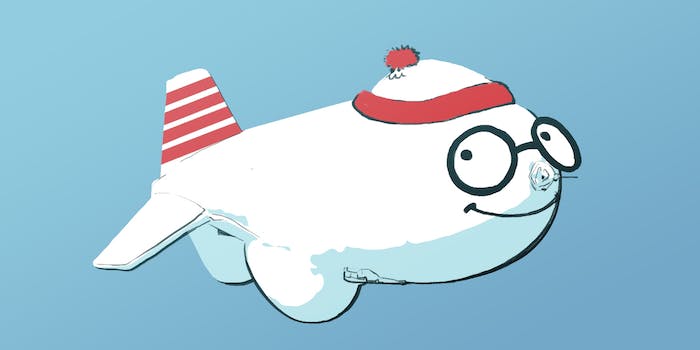 ‘The Blimp Who Ran Away’: a children’s story for the surveillance age

'I'm so lonesome,' the Big White Blimp harrumphed to no one in particular.

On a drizzly Wednesday morning in late October, the Big White Blimp was bored. All of its friends had gone away, and it was sitting all by itself, tied to a mooring station at Aberdeen Proving Ground, a military base in Maryland, just northeast of Washington, D.C.

“I’m so lonesome,” the Big White Blimp harrumphed to no one in particular. “I wish I had a friend who would play games like ‘Pin The Tail On The Hindenburg’ and order turkey subs from Blimpie’s with me.”

No in particular responded to the Big White Blimp’s plea for attention, because the only people around were humans, who never paid much attention to anything it had to say. The blimp was fed up with how nobody at Aberdeen Proving Ground appreciated how smart and talented and charming it was. They all just took the Big White Blimp for granted.

That’s when the Big White Blimp decided to run away.

The blimp from @USAGAPG has come off its tether. If you see it on the ground, call 911. Here's what it looks like. pic.twitter.com/mRHhpJdfHU

Running away was a good idea, the Big White Blimp thought. Not only would it find some friends to play with on its adventure, but all the humans at Aberdeen Proving Ground would get so sad about it running away, knowing it was all their fault, that they would never be mean and ignore it again.

The Big White Blimp was right. The humans were sad that it was gone. They were so sad they got into their airplanes and chased after it.

A military blimp has broken free from its tether in Maryland & is now floating somewhere above Pennsylvania. 2 F-16s have been scrambled.

It wasn’t just the humans who had always ignored the blimp who cared that it had run away.

Exerting your independence is an important part of growing up.

I bet the blimp is really happy now ☺️

"Why is everybody tweeting about a blimp?" — @igorbobic, demonstrating that debate reporters have lost touch with #america

Some people said the Big White Blimp’s adventure reminded them of a Hollywood movie. The Big White Blimp never watched many movies, because it was an inanimate object without the capacity to actually “watch” anything in a way that requires sentient thought, but it was still excited that people were cheering it on.

“Am I am celebrity now?” wondered the Big White Blimp. “I should get an agent just in case.”

Another person said they wanted to dress up like the Big White Blimp for Halloween.

I feel that I should drop all previous costume plans and dress up as a runaway surveillance blimp for Halloween: https://t.co/EdTopHKUYJ

Besides, a “Sexy Runaway Blimp” is actually a pretty good costume.

Some people, though, were still mad at the Big White Blimp. They said it had cost too much to build and was an enormous federal boondoggle emblematic of everything wrong with the military appropriations system.

This could be the most bizarre and dramatic end of a multibillion dollar boondoggle ever: https://t.co/bASRMR3Lw7

The Raytheon blimp costs five times more than what the gov lost on Solyndra. But this form of government waste is more amusing.

General Jim Cartwright pushed within the Pentagon for the JLENS blimp. Then he retired and joined Raytheon's board, paid $828k in cash/stock

This made the Big White Blimp sad. It didn’t ask to be born. Hearing people say these mean things about the Big White Blimp made it cry cable tears. Cable tears—that’s what happens when blimps get sad—can be dangerous. This is why most people try really hard not to say mean things to blimps, which are widely considered to be the most emotional of all military aircraft.

The Man Who Lives in Russia Because of Scary Monsters in the Computer said the blimp running away was ridiculous and started laughing.

I should know better by now, but even I still have trouble believing that "runaway surveillance blimp" is actually a thing.

In fact, The Man Who Lives in Russia Because of Scary Monsters in the Computer said that he and the Big White Blimp had a lot in common.

This made the Big White Blimp happy, because it had found a friend, which is all it wanted in the first place.

Knowing it had a made a new friend to play fun games and eat Blimpie’s with, the Big White Blimp stopped running away and let the humans take it down to the ground.

Baby's on the ground: NORAD confirms to @wbaltv11 the escaped blimp has been lassoed & is on the ground. pic.twitter.com/RY90Zjdbtp

19 hours ago, Raytheon, which makes the $2 bil spy blimp, posted a job opening for a blimp watcher in MD https://t.co/ALFR3wBP7X

The Big White Blimp liked this very much. It felt bad that it had made the humans so sad, but it was also happy that it got to go on an exciting adventure.