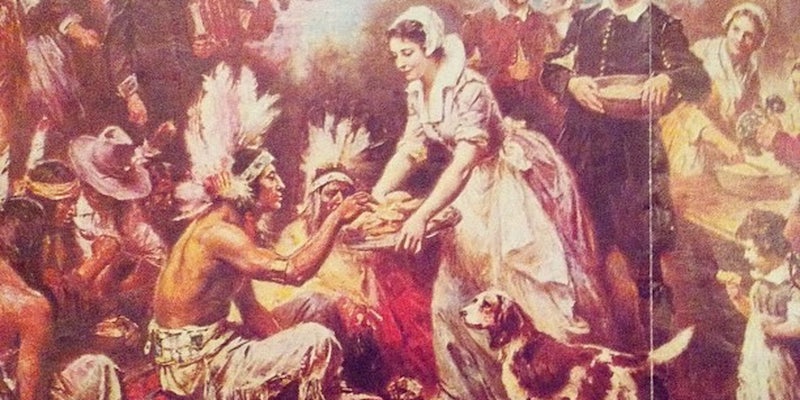 Thanksgiving's real history should never be forgotten. But we should still be thankful for America's best holiday.

It’s Thanksgiving. I wasn’t planning on writing anything, but then I saw this tweet from BoingBoing’s much-loved blogger, Xeni Jardin:

The implication is that today we ignore both the true story of Native Americans and Thanksgiving in this country. And it is a history filled with oppression, death, and ignorance. Take, for instance, the 1637 Mystic Massacre, where English colonists set fire to an entire Pequot Village near the Mystic River, killing as many as 700 people.

There’s no doubt Native American Heritage Month needs to be more prominent in the minds of Americans during the month of Thanksgiving. But Jardin, and people like the Huffington Post’s Nicole Breedlove, are ignoring the later history of the holiday and what Thanksgiving means to America now.

Yes, Thanksgiving came from a dark era in America’s history. But good traditions can come from bad times. You can find historical flaws in every holiday we celebrate because the past is replete with oppression. Only a very new holiday might not be tainted by racism and sexism, though even that’s not likely. Luckily, traditions change with the people who observe them.

Thanksgiving is a day that celebrates family, friends, food, and philanthropy. If you want to look at today in terms of utility—the measure of pleasure vs. pain—today likely ranks highest in the United States. A day famous for sharing with family (and charities), the holiday provides far more goodwill than suffering.

Thanksgiving, along with the country, has changed. Ignoring the almost 400 years of history that followed the first Thanksgiving does a disservice to the holiday and to Americans. The true story of this day should certainly be studied by all Americans, but it is no reason to get rid of our best holiday.