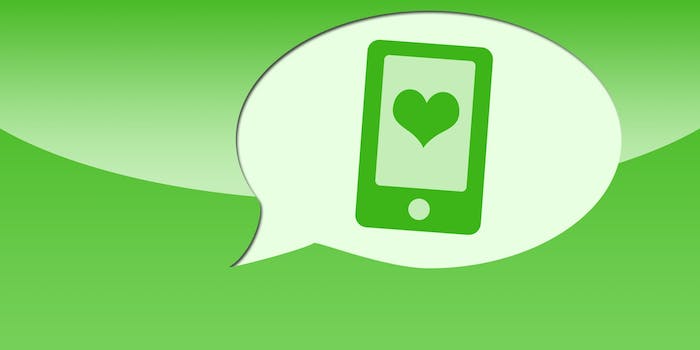 Want to show your love for someone? Send a text message.

You can try sending sending cute messages via WhatsApp, iMessage or any other messaging app, but they all have one flaw: They’re free.

Costless messages will always be taken less seriously than messages that someone actually paid for. Sending a file to someone you love using an old-fashioned text message is far more romantic and meaningul than sending it via WhatsApp.

Nothing says “I FANCY YOU” like a large text message spread. If you care for someone, you oughta pay for it; that’s life.

Sadly, we send fewer text messages these days. When you receive one, however, you’ll be surprised, and wonder why it was not sent via WhatsApp. You’ll certainly pay far more attention to it. As we all know, when something is being done less, it means more.

Unexpected flirtation is, sadly, the main and only function that’s left for text messages—they effectively became the platinum club for lovers, as well as people without proper Wi-Fi or 4G. Note that even if you have a 400-texts-per-month phone contract, it’s still paid and thus remains romantic.

A different kind of hassle is when you can’t seem to get an MMS message because of phone companies screwing with your love life.

Ever since Apple replaced my phone, I no longer get MMS messages. When I get a group SMS.. I get a separate message from every Android user.

The classic 2005 issue is when you send a text message that is “too long” (what?) and then it becomes an MMS, and then you pay extra for it. This is still an issue, as the last person to get this bill is expected to exist well into the next century:

I just typed a text message so long it had to be converted to mms, then I was told I ran out of space

So if you really love someone, block them on WhatsApp and shoot them a text instead.