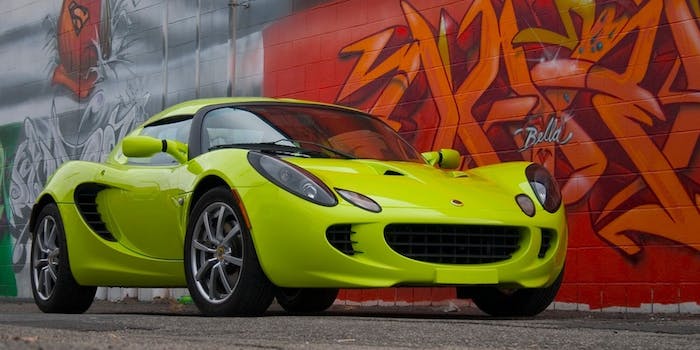 Tesla is quickly taking over the car market, but to pave a future for the electric cars, the company needs to bring it's competitors with it.

Just like the man they are named after, Tesla continues to innovate in new and unexpected ways.

The electric car company, led by famously original CEO Elon Musk, is making headlines again this week, after Morgan Stanley Research analyst Adam Jones declared them the most important automaker in the world. In his analysis of Morgan Stanley’s findings, the L.A. Times Jerry Hirsch quoted Jones’ as saying that Tesla is the “most American made car on the road, pushing 90 percent U.S. content.”

Not that the gigafactory would be the first ridiculously ambitious project Musk has gotten behind. You may have heard about that idea for a hyperloop bullet train between Los Angeles and San Francisco that Musk is championing.

But Jones’ most important reason for giving Tesla Morgan Stanley’s endorsement is probably that they’re trying to light a fire under more car companies to create similar vehicles. Since Musk has made headlines stemming from the decision to share Tesla’s patents with other automakers, several of the company’s chief rivals in electric car manufacturing have indeed voiced their interest in collaborating with Tesla to improve their own products.

This future where all the major automakers are working together to create fuel efficient cars for everyone sounds nice, but it is hardly a reality yet. Even if Tesla is the most important car company in the world, they’ve got miles to go before Musk’s lofty ideas really start to shape the industry. The truth is, there’s a danger in letting Tesla play in the sandbox all by themselves while the “big boy” car companies continue business as usual. If attitudes about electric cars are going to change, Tesla can’t be leading the charge all by themselves.

Tesla has received plenty of accolades and awards, there’s no doubt about that. But more importantly, they’ve made several great strides in the fight to put electric cars in the homes of Americans. For a long time, the biggest complaint about electric cars was that they couldn’t go fast, a notion that Tesla, and specifically the Model S, have since disproved.

People have also wondered whether the time it takes to charge an electric car is practical. On a daily basis, this wouldn’t likely be an issue, but for longer trips, Tesla has committed themselves to creating stations that will swap your battery out for you. And studies now indicate that, assuming one is smart about charging, 95 percent of all trips could be made by electric cars. This is even better news coupled with findings that suggest the Model S is the safest car pretty much ever.

All this advancement isn’t cheap. The Model S (by far Tesla’s most practical option) costs upwards of $60,000, which doesn’t exactly make it an easy sell for the average American. But Tesla’s proposed gigafactory’s are in theory a huge step towards mass production, and therefore, toward creating more affordable cars.

Tesla has gone from being the little engine that could to the little engine that might. Tesla’s market value is still only $27 billion, a small amount compared to Ford’s $60 billion and General Motors’ $55 billion. But in this year’s Consumer Reports Ca -Brand Perception Survey, Tesla had the fifth-best brand perception of any automaker in the world.

This is all the more impressive, considering the disconcerting perceptions Consumer Reports found Americans had about electric cars just a few years ago. Many of the fears people had were along the lines of the one’s discussed above, which Tesla are actively trying to address. But as many as 30 percent of people surveyed also expressed concerns about electric shock, which, by all accounts, are completely unfounded.

However, the main challenge that electric cars have to overcome in terms of people’s perceptions is not how fast they are, how much range they have, or whether they’ll shock you to death. Their main challenge is combatting stigmas about people who drive them.

In a piece exploring the relationship between Tesla and larger perceptions of electric cars, Clean Technica’s Zachary Shahan relayed an anecdote about his sister.

I gave my sister a quick summary of the electric cars currently on the market and made sure to point out some big Tesla facts. Afterwards, she decided that she wanted a Tesla Model X. She then mentioned to some of her co-workers (she manages a restaurant in NYC) that she wanted an electric car. One of the guys she worked with (presumably a bit of a gearhead) said something along the lines of, ‘electric cars are so girly.’ She responded that she didn’t want just any electric car but a Tesla Model X. He then responded something along the lines of, ‘Oh, Tesla, well that’s different. Tesla cars are great.’ Presumably, Teslas are macho enough for him.

Not even taking into account the obvious sexism of the man in Shahan’s story, this instance reveals deeper problems about Americans’ feelings towards electric cars. Besides Tesla, electric cars aren’t “cool.” They don’t fit the macho, gas-fueled tradition that remains associated with American cars, and American car lovers. Essentially, what’s happening now is that Tesla is being fetishized as the one and only route to go if you want to be cool and you want to drive an electric car.

This could be great for Tesla if they were content to simply dominate their small corner of the market, but that doesn’t fit the vision Elon Musk has outlined. In a strange way, for Tesla’s brand to become wider accepted, it will have to be diluted. Only when other car companies start following their lead will perceptions finally start to change.

In the meantime, there’s a lot that hangs in the balance. Despite their cache, Tesla’s grasp on success remains somewhat tenuous. If, for instance, the government programs that make so many of their plans possible get shut down, they’re going to struggle to survive.

In a world on the precipice of self-driving cars, Tesla’s “the future is now attitude” remains singularly appropriate. Musk’s patent trick is a gamble, but hopefully it’s a gamble that pays off. Nissan and BMW have already expressed their desire to work with Tesla on shaping their electric car initiatives. If more automakers follow suit, American consumers may just get behind the rise of the electric car, too.