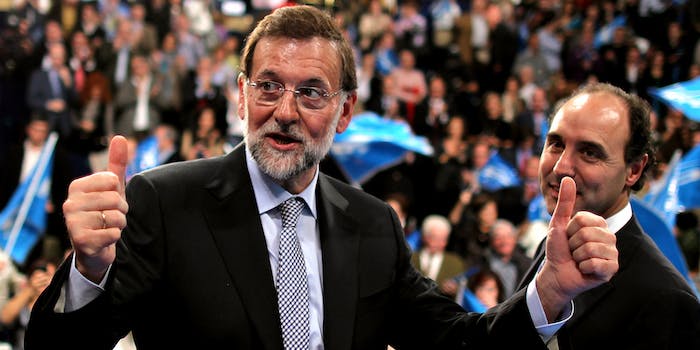 This teenager punched Spain’s prime minister in the head

You are so grounded.

With elections coming up, Spanish Prime Minister Mariano Rajoy has been spending a lot of time on the campaign trail, where candidates are at their most vulnerable. The media is asking tough questions, and you have to face unpredictable constituents who might say or do anything while the cameras are rolling.

But even the best-prepared politician couldn’t have seen this sucker punch coming.

Obviously this kind of behavior shouldn’t be condoned, but if it is going to happen, it’s nice to see someone doe a WWE mash-up on Twitter.

Rajoy, who survived a helicopter crash back in 2005, didn’t seem much worse for wear after the attack, tweeting out this message to his followers: “I’m well, I’m halfway to a rally in La Coruna. We continue to develop a #EspañaEnSerio.”

The teenager, who was swiftly arrested, was unrepentant about punching the PM in the face, reportedly telling police, “I’m very happy I did it.”