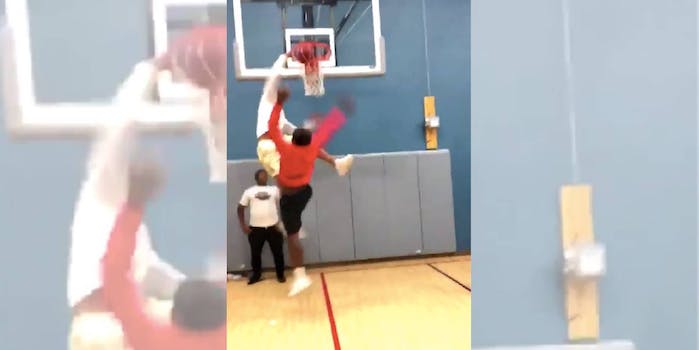 This posterizing high school dunk will make you think: ‘Wow, that was a pretty good dunk’

He left the defender speechless.

Everyone’s talking about this good dunk, a basketball slammeroo so powerful that it left the defender sitting speechless on the floor and the crowd rushing in to mock him.

You thought it was impossible for one human being to shame another so thoroughly using only the old orange pigskin roundball, but as you can see, you were wrong:

The dunker of the good dunk is Jordyn Adams, a mere teenager from Blythewood, South Carolina, whose prowess in two sports has made him a top high school prospect. But those sports are baseball and football, not the big basketball dunk competition.

Consider the implications: His poor opponent was humiliated, in a fashion worthy of a poster on a fanatic’s wall, by someone who doesn’t even “handle the rock” on a regular basis. Goddamn. Goddamn goddamn.

The reaction to the very good dunk has been tremendous and pitiless:

You can see the exact moment when that kid's soul left his body. pic.twitter.com/DPZS6TzeDe

If this happened to my son he'd go up for adoption https://t.co/RnsH8U2ha5

And now, just for rub-ins, “Jordyn Adams dunk” is now the top Google search for Adams’s name, surpassing anything to do with the sports he actually plays.

Turns out that yes, indeed, it was a very good dunk.