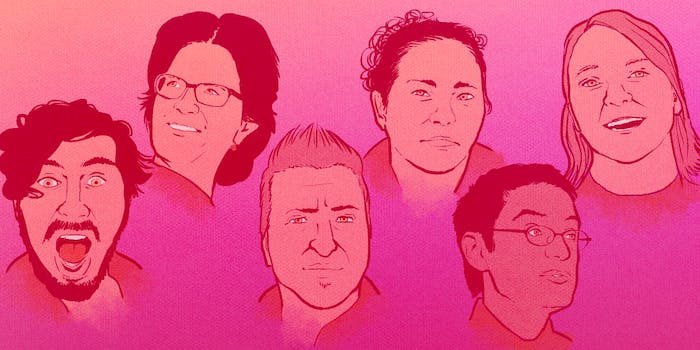 After Wednesday, tech journalism will never be the same. Techmeme—tech journalism’s preeminent echo chamber—just updated its leaderboard system with a page ranking its top 100 individual authors.

For the unacquainted, Techmeme is the first stop on the Internet for many tech industry types, from reporters and startup founders to PR reps and VCs. The site, founded by Gabe Rivera, offers a curated digest of the tech news of the day. Unfortunately, Rivera displayed no immediate interest in pivoting his site into a dating app for reporters.

Just how and why certain stories wind up as handpicked Techmeme headlines (which translate into ranking status) remains somewhat contentious. Insofar as we can tell, Techmeme’s many rankings are a result of karma free-floating in the vast randomness of the universe, karma that just so happens to regularly drift toward outlets that the site historically tends to favor. On Techmeme, there’s not much regard for careful sourcing or tracking where a story comes from—mostly it’s just whatever.

Most of the stuff that makes Techmeme is the kind of lifeless news that a reporter got briefed on the week prior after being neutered into an embargo by a PR rep for a Major Tech Company. The reporter trades the PR rep for access which can in turn be redeemed for (1) Techmeme headline.

New @techmeme leaderboards are fascinating. And they have an FAQ question specifically for me http://t.co/avo25uhZCq pic.twitter.com/j81HTvCqMm

Whether scoring a Techmeme headline drives much traffic in the era of the Facebook-as-publisher behemoth is, like all things Techmeme, also somewhat contentious. Much like the Facebook algorithm, Techmeme uses Secret Magic™ to aggregate content from around the tech blogosphere, doling it back out to those who know it best. We devour it; we know not why.

Normal people may have no idea what Techmeme is, but the site’s ebb and flow dictate much of the tech news cycle, rocking us into a pleasant, predictable lull day in and day out. Getting top billing on Techmeme is a sort of tech journalism mini-game with totally random, intermittent rewards.

@Techmeme Great. Another tool for editors to use to beat down writers who aren't at the top of the board. Journalism isn't a horse race.

Though its new author leaderboard feature might appear otherwise, Techmeme doesn’t consider itself a popularity contest. Meanwhile, participation in the whole Techmeme thing feels as fierce, random, and stupid as vying for a seat at the cool kids’ table in a middle school cafeteria. Those of us who are no good at the game wind up eating ham sandwiches with the thirstless stoners. Ultimately, we know the stoners are cooler but still. 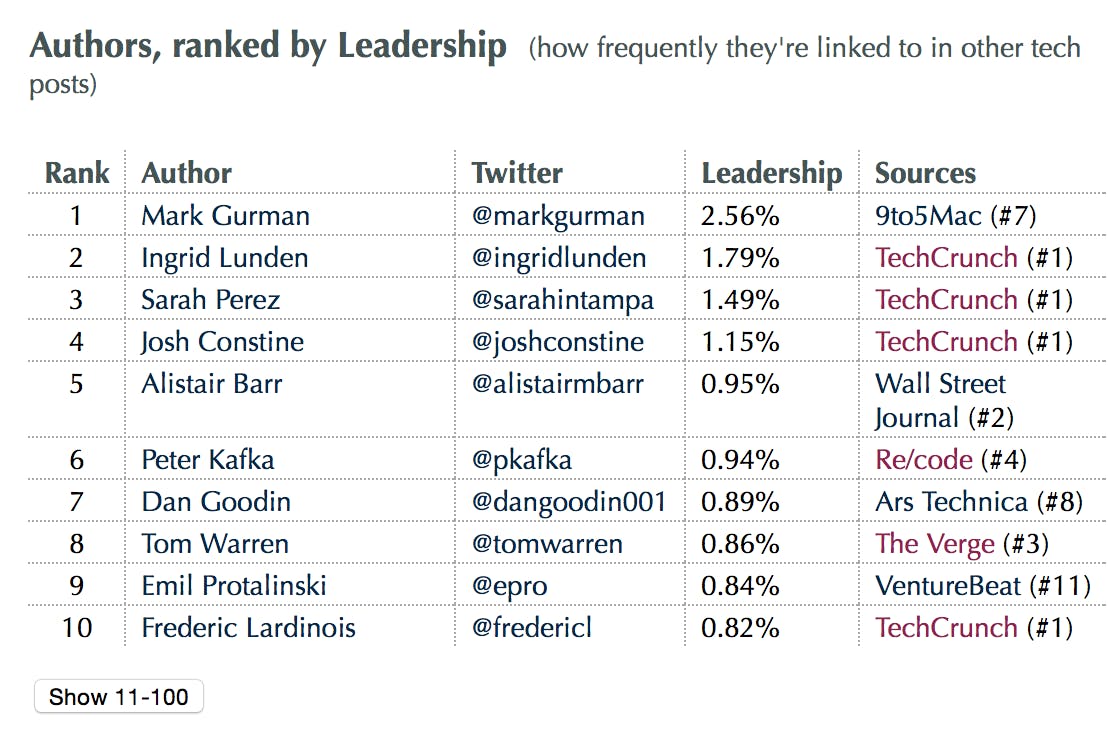 So much about Mark Gurman is a mystery. Where does he get those Apple scoops? Is he really college-aged? It’s a risk.

Bonus points for being a ReadWriteWeb alum. Tampa sounds warm, maybe we could visit?

We’ll do whatever it takes to be nearer to the omnibang. Would bang for bang.

He seems like a serious guy, the kind of guy I would want to respect me and who hopefully doesn’t read this list. That’s probably not accurate.

Tom Warren writes about Windows so the rest of us don’t have to. Bless you, Tom Warren.

Frederic is one of Portland’s three tech journalists, and we just wouldn’t want to mess up a good thing, you know?

We’re basically already in love. Ina is obviously the best, this is a no-brainer.

Just saw a diagram of my internal organs. pic.twitter.com/A9RQO2sN8c

I mean, we respect your reporting so this is basically a respect thing at this point, yeah. See Techmeme takedown tweet above.

What kind of question is this?

He’s tall, he writes about gay stuff sometimes. What’s not to love?

Twitter always suggests Ryan Lawler in my “Who to follow” list, which gives me an icky “neither can live while the other survives” kind of vibe.

I think Jordan is also gay and around my age. Too real.

Ed is like everyone’s super nice uncle or something, so that’s a hard line.

We wouldn’t want to distract him from the important business of being tech journalism’s puzzlingly earnest collective hallucination.

Would def hold hands though.

Nice guy, would do.

Our encounters with him make us think that he gets it, you know?

We want him to be our BFF for actually ever, so we won’t go mucking it up.

I’m sure we would both get a thinkpiece out of it.

Thinkpiece: We're all fucked, some more than others, you especially, embrace it.

Isn’t Lizard Squad always DDoSing this guy? We don’t really want to get in the middle of it, sounds complicated.

A former writer with the Daily Dot, Micah is probably too busy “reporting stuff” to notice this list, but in his heart of hearts, he knows the truth.

Note: This list is not a popularity contest, but if it were one you could probably get on it by following us on Twitter, Snapchat, Vine, Instagram, and Facebook, signing up for our newsletter, or having a medium-good hair day.

Well, that was awkward!

With that out of the way, we’ll return to the lucrative business of attending expensive press dinners, regurgitating spoonfed PR pseudo-scoops, and otherwise clawing our way** into tech’s most thickly insulated, innermost circles, one totally not arbitrary list at a time.

*We don’t actually want to fuck anyone on Techmeme’s author list. Or like, at least I don’t. Wanting to fuck people is thirsty—gross.