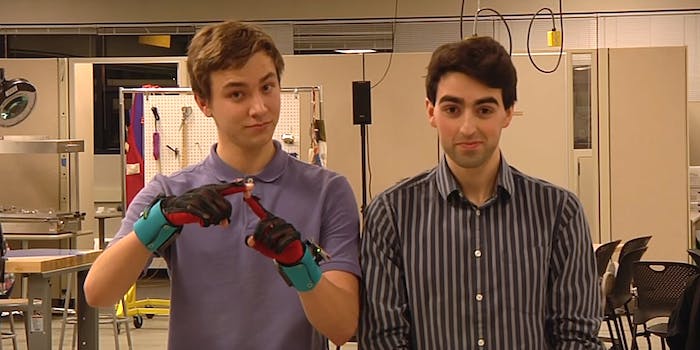 Screengrab via UW (University of Washington/YouTube

Technology can help the hard of hearing, but it too often misses the mark.

Technology is one of the greatest things to ever happen in the Deaf community. Certain cochlear devices now automatically sync to iPhone technology and captioning is becoming more mainstream. Everyday the tech industry is coming out with a new technology that increases accessibility and inclusivity, but often times many of these devices sound good in theory but don’t really help.

This seemingly accessible technology is nothing new to the Deaf community. A common example many Deaf people agree on is closed captioning glasses or other physical captioning devices. They require a Deaf person to wear awkward, chunky glasses and half the time the captions do not even come up, sometimes even captioning the wrong film. Who would want to pay $20 and up to watch a movie only to be uncomfortable and miss half of what is going on?

These type of devices may seem to increase accessibility in principle, but they typically cause a great inconvenience to Deaf people (like myself) and almost never efficiently work.

If you have been on Facebook or Reddit in the past few weeks or if you follow engineering and technology news, then you are probably familiar with the two University of Washington undergraduates who just won a $10,000 Lemelson-MIT Student Prize for their invention of gloves that can supposedly translate sign language.

Their viral video, depicts a demonstration of how exactly the gloves work.

But, what you don’t know is how little these gloves will actually contribute to the Deaf community as a whole. Although these gloves may be a leap in technology, they’re not a step in the right direction.

There are up to 40 million Americans with some amount of hearing loss, with 4 million of them having a diagnosable hearing disability. Many of these people who find themselves to be moderately to profoundly deaf heavily rely on American Sign Language as their primary language.

Despite common belief, though, American Sign Language is a very different language than English. It is its own complete language with its own grammar structure, vocabulary, and syntax. It is arguably less related to the English language than languages such as Chinese since it is so unique and relies on visuals rather than sound. The glove’s translation will be extraordinarily inaccurate due to these language barriers. Translation is not as simple as the word-for-word replacement method used by these gloves. It is already common knowledge that computers are not perfect when it comes to language. How many times have you seen something poorly translated by Google Translate?

American Sign Language is a very different language than English.

American Sign Language relies heavily on facial expression and body language—something that these gloves will not be able to detect.

The meaning of a sentence can significantly change based on a user’s specific body language or facial expression. For example, if someone is lifting their eyebrows during a sentence or phrase, that specific moment means they are asking a yes or no question to whomever they are signing with. It is also evident that a single sign can have more than one meaning, given the context of a conversation. Keeping all this in mind, it’s very easy to imagine how quickly people will get lost in the translation. Despite all the knowledge, time, research, and money put into this technology, it is almost impossible that these gloves will ever be able to accurately and efficiently translate American Sign Language.

Although these gloves are technologically impressive, they unfortunately do not encompass what it truly means to have full accessibility. They appear to embrace American Sign Language, but in reality they create a misconception of ASL and therefore a misconception of Deaf culture.

There is just very little practical use in them for Deaf individuals since the gloves are very one-sided. The inventors pride themselves on inclusivity, but they only account for half the conversation. Plus, who wants to wear giant mechanical gloves during a one sided conversation anyway? Also keep in mind that for decades medically deaf people have found ways to comfortably communicate their thoughts, whether it be typing, writing, or using oral speech. Typically, the main concern for the Deaf community in terms of accessibility and inclusivity is understanding the world and speech around them—something quite opposite of what these gloves do.

Deaf people constantly use technology in their lives, whether it be vibrating alarm clocks, video phones, light-flashing doorbells, or even hearing aid and cochlear implant technologies.

This leads to the question: What exactly are these gloves’ main purpose?

This is not the first time this idea has been thrown around; students and engineers from Cornell University in New York, Ukraine, and Mexico City have all had similar inventions. Yet time and time again, they fail due to the fact that they have no purpose or practical use.

If you really want to be inclusive on an individual level, learning American Sign Language is the best option. It allows the hearing person to embrace an important part of the Deaf identity and make things all around more comfortable for the Deaf. If you are looking for a technological solution, speech-to-text technology is the most viable option of communication. This makes things easier on the Deaf person and hearing individual, since he or she can accurately understand what the hearing person is trying to say, while the hearing person is able to comfortably use their voice.

Although speech-to-text and automatic real-time captioning technology is not perfect as of right now, it is much more promising from a research and practical perspective.

Deaf people constantly use technology in their lives, whether it be vibrating alarm clocks, video phones, light-flashing doorbells, or even hearing aid and cochlear implant technologies. The intentions of the creators of these gloves were definitely good and in theory these gloves may seem to embrace American Sign Language and increase accessibility, but the fact of the matter is they are inefficient and impractical for deaf users.

Morgan Leahy is profoundly deaf individual who is a user of American Sign Language and cochlear implant technology. She is active in the Disability and Deaf Rights communities. She specializes in deaf technology and special education. She is also a video game and general technology enthusiast. Follow her on Twitter @momoxmia.