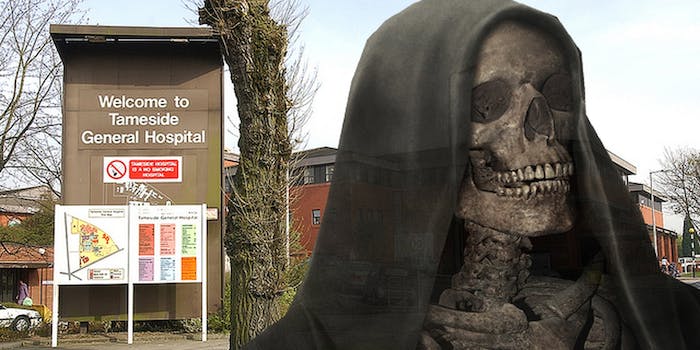 A blogger's Photoshop of the Grim Reaper in front of Tameside General Hospital has become the top-ranked image of the hospital on Google.

Tameside General Hospital, a half-hour’s drive east from Manchester, U.K., has problems: Earlier this year, it became one of five hospitals subject to a probe concerning avoidable deaths and patient neglect.

This prompted a blogger, the Tameside Citizen, to write a post on the facility’s worryingly high mortality rates, accompanied by a photo of the building—with a Grim Reaper lurking close by. Commenters piled on with stories of relatives dying needlessly, understaffed wards, and virus outbreaks that were covered up.

The Grim Reaper image then became one of the top-ranked when people Googled photos of Tameside General, and began to appear alongside Google’s map of the area when users typed in the hospital name.

The Manchester Evening News sought to change that and contacted Google about killing the image off. It no longer appears next to the map in searches, though the article, with the same photo, is now a top result.

A Google spokeswoman admitted the automatically-generated image had been ‘inappropriate’ and confirmed it had now been removed from its image database.

The picture itself, however, is not going anywhere—at least not until the original blog posts (the image has been reused by the Tameside Citizen) are removed or modified. Anyone wishing to get a look at the hospital online will see the skeletal, black-hooded Reaper, which goes to show how sticky digital associations, especially unwanted ones, can be.

Still, that hardly seems the most pressing issue for a hospital in which “18 per cent more patients … died than would be expected” at a similar facility. Perhaps focusing on best medical practices would do more to keep the specter of death away.

Photo via the Tameside Citizen