Taco Bell just got the best endorsement it could ever ask for from a man in a coma.

A Florida man awoke from 48 days of impromptu shut-eye. The first words out of his mouth? “I want Taco Bell.”

Jake Booth could barely form a sentence yet he knew where he was—Tampa General Hospital—and exactly what he’d been craving since falling into a coma following a heart attack. He had been admitted due to bronchitis that had metastasized into double pneumonia and not an enchirito addiction.

Booth sadly was unable to live mas right away and spent 22 more days working on building up his strength for the type of feast known only to stoners and overeager teenagers. A bevy of crunchy tacos awaited him when he was finally able to consume solid foods.

Just look at the smile on the face of this happy customer. Booth’s family and friends ran for the border for him and came up big: He was able to crush eight and a half crunchy tacos, which is basically a party box but for one person.

The photo first made the rounds on Reddit thanks to a friend who was inspired by Booth’s verve for the fast food chain. Needless to say, Taco Ball has eaten his story up as well. He was recently sent some sweet branded swag that would make any chalupa lover jealous. 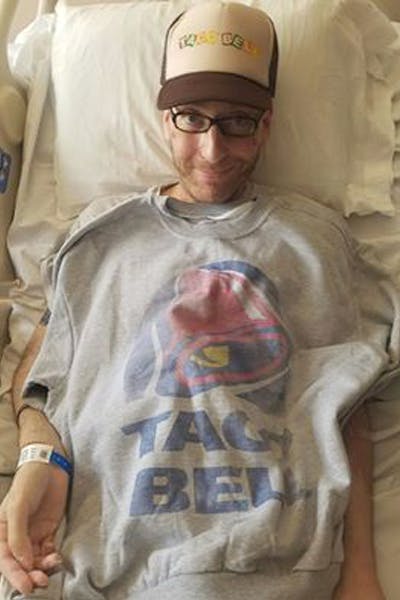 The 35-year-old is a father of two and a former Sheriff’s deputy who served in the Army. He’s still got a ways to go before he’s able to tackle the likes of a fat crunchwrap stack or a pile of those sweet $5 boxes Taco Bell’s always got going on. Fellow Taco Bell fans and fans of his story can help, however.Booth’s brother has set up a GoFundMe to help pay for his medical expenses, which you can donate to here.