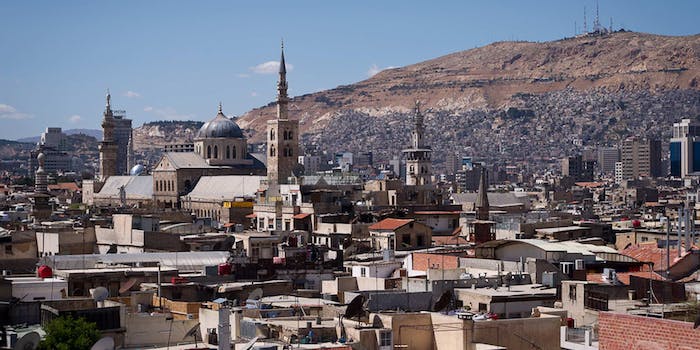 Syria’s Internet back up, blackout blamed on broken cable

After about a day of silence, Syria’s Internet is coming back online.

After about a day of silence, Syria’s Internet is coming back online.

Yesterday’s blackout was the fourth since the civil war began in March of 2011. At the end of last year, it went down for two days. It experienced similar shutouts in July, 2012 for less than an hour and the year previous. In each of these instances the Internet disappeared in about 30 seconds.

Renesys, the global Internet traffic tracking company, reported that after 19.5 hours, the Syrian Internet has returned. On their Twitter account they wrote “Syrian Internet is returning.  First probes making it through, routing restoration in progress.” The return was confirmed by Akamai.

Exactly why the Internet went down, and who restored it, is uncertain. The rebels and the government have both been accused of cutting communications lines, or destroying them through bombing. But Syria has four main branches that connect the country to the worldwide Internet and could conceivably be shut off by the country’s telecom authority.

Syrian state media reported the failure as a result of a fault in a fiber optic cable. Experts told BBC that was unlikely since three of four submarine cables attached to the country were functional. Some rebels believed it was to mask a major offensive against them, which did not materialize.

A representative of notorious pro-government hacking group the Syrian Electronic Army told the Daily Dot that, “as the STE [Syrian Telecommunications Establishment] said, it was due to a break in the optical cable.” The SEA doesn’t suspect there was another cause of the outage.

“In the early days, we reported each outage breathlessly,” wrote James Cowie on the Rensys blog, “shocked that the Internet could fail in such spectacular ways. If you look around the web this morning, you’ll see a lot of that same shock-and-awe reporting from companies who are just discovering the fragilities visible in Internet data… In this case, however, what strikes me is the depressing sameness of the sequence of Syrian Internet disconnections.”

Loss of the Internet to a country is no longer a one-off. It’s become an anticipated element of conflict.

H/T The Next Web | Photo via sharnik/Flickr