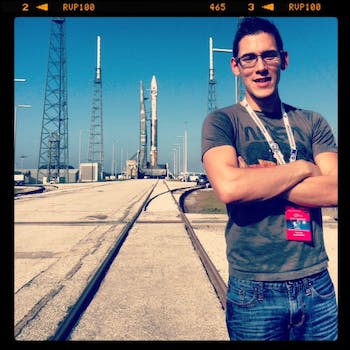 On Jan. 21, four years after NASA’s first Tweetup event, those who attended the in-person get togethers for NASA’s fans on the Web commemorated the anniversary in style.

Participants in the daylong celebration of Tweetups (now called NASA Social events) posted more than 21,000 tweets. A dedicated Facebook group with more than 560 members is also filled with memories. An agenda detailed the topics of conversation for the event.

An Eventifier collection of more than 8,100 tweets reveals the participants’ delight as they reminisced about their experiences and reconnected using the medium that brought them together in the first place. 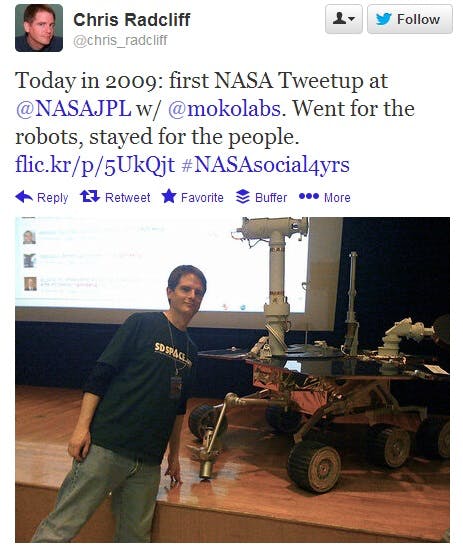 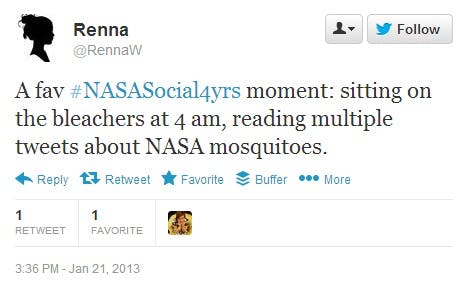 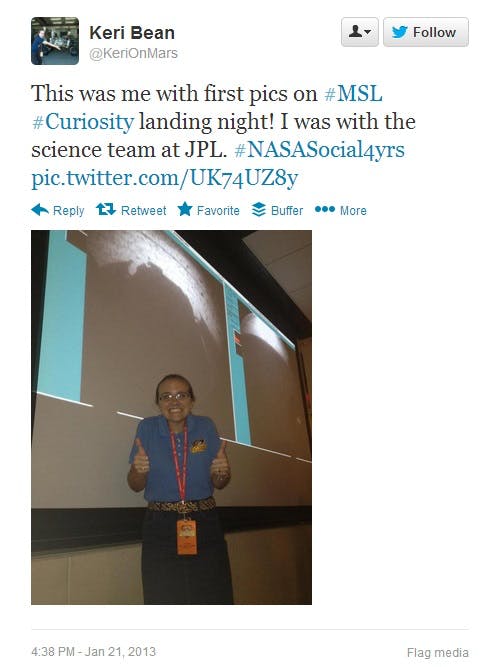 “We held the Tweetups because we wanted people to come here and meet us, meet the team members,” said Veronica McGregor, news and social media manager at NASA’s Jet Propulsion Laboratory (JPL) in Pasadena, Calif. “What really ended up happening was they met each other. That changed everything.”

Where their families and friends might not understand or share their passion for space, NASA Social participants found dozens of kindred spirits at the events.

The January anniversary made it plain to see just what NASA Social means to fans, and it’s largely thanks to the work of McGregor.

The road to the first Tweetup began when McGregor started the first real NASA Twitter account. While @NASA did exist before @MarsPhoenix, it largely served to share NASA press releases automatically.

McGregor changed that impersonal approach by imbuing @MarsPhoenix, which tracked the Mars rover of the same name, with a personality and a first-person perspective, partly driven by Twitter’s character limit.

It found a real following among Twitter users in 2008, ranking as one of the 10 most-followed accounts as McGregor switched from sharing news about the rover’s discoveries to answering questions and becoming deeply involved with the community.

@MarsPhoenix struck a chord with gamers, in particular, and many referenced Portal in their tweets to the account. NASA lost contact with the Phoenix in November 2008, effectively ending the mission. McGregor then sent a tweet in binary code which, when translated, read “triumph.” That’s a reference to the Portal theme song, and a nod to some of @MarsPhoenix’s most passionate supporters.

That self-awareness and humor spilled over into @MarsCuriosity, which announced the Mars Curiosity Rover’s arrival on the Red Planet in a bombastic fashion. 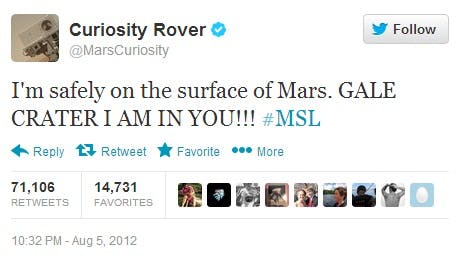 Social media specialists Stephanie L. Smith and Courtney O’Connor help run the feed, which is festooned with pop culture references, movie quotes, and song lyrics. When rumors emerged that the rover had found signs of life on Mars, the team dismissed the claims with typical charm.

Talking to McGregor on the phone, it’s easy to figure out where the @MarsPhoenix and @MarsCuriosity pep comes from: She’s lively, funny, and warm. But it goes beyond the Twitter accounts themselves: Not only did the spirit of @MarsPhoenix not pass away when the rover lost contact; the end of the mission prompted the first Tweetup.

“The Mars Phoenix mission had ended. There was an incredible wave of grief that hit Twitter and the Internet,” said McGregor. “The Tweetup idea actually came about as a way of keeping in contact with the people who had followed the Mars Phoenix Twitter account.”

McGregor attended a Tweetup fans had themselves organized, but noting that there was no real theme, she decided to do a space-themed Tweetup at JPL. 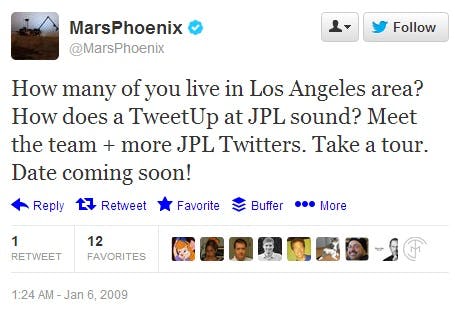 NASA invited 150 Twitter users from all over the country (which surprised McGregor) to meet JPL scientists and engineers, and got a chance to take a tour and learn more about the facility. They also got a chance to meet the next rover, Curiosity. Many JPL employees were excited to take part too.

From the get-go, the Tweetups were broadcast on Ustream, letting those who were not lucky enough to attend in person get a glimpse inside JPL along with attendees.

Since that first Tweetup, more than 4,200 fans have attended more than 50 NASA Social events at 11 locations, where people connect to NASA on the likes of Twitter, Facebook, and Google+ can get an inside look at a facility and talk to astronauts and scientists in person.

One alumnus is Frank Luciano, a 27-year-old Walt Disney World concierge in Orlando, who attended the Tracking and Data Relay Satellite (TDRS) launch at Florida’s Kennedy Space Center in January.

Luciano, who has a lifelong passion for space, tried several times to win an invite to a NASA Social event. When he finally received the fateful email, he described it as “one of the happiest days of my life.”

Though already a passholder at the center and familiar with the sights and sounds, Luciano claimed “everything surrounding the social was exciting. Especially meeting people who were if not more just as excited as I was.”

Two things particularly stood out for Luciano on this visit: getting to within 100 feet of the rocket carrying the TDRS, which he noted was “breathtaking to be that close,” and getting to step onto a mobile launch pad and see its inner workings. That inherent ambassadorship, by which NASA Social attendees spread the agency’s message, is part of NASA’s social media strategy.

NASA has a strong presence on the Web, with more than 480 accounts on different social networks and services. One of the main goals of each tweet or post is to take people through to the agency’s website, according to NASA social media manager John Yembrick.

The JPL social media team strategizes each morning to determine what news will be shared each day, and they tailor snippets for each social network. They almost always include a photo, even on Twitter, and the Facebook and Google+ messages are generally similar. When some of the YouTube videos garnered complaints from some commenters who said certain concepts weren’t explained well, that feedback led the team to include a little more explanation in JPL videos.

The agency apparently broke Ustream records for live views of a stream when an asteroid sailed close by to Earth in February. The stream switched between telescopes all over the planet to track the asteroid as it sped by.

Yembrick also noted that NASA gets involved with fan communities, helping update wikis as a contributor or sharing an upcoming event on a Facebook page as a member rather than trying to manage such supporter-driven initiatives.

“These people are telling our story in a compelling way that reaches a different audience,” Yembrick told the Daily Dot, “so we’ve actually opened up our media accreditation system and badging system for social media people.”

The community aspect of NASA Social may well prove NASA’s lasting legacy on the Web for its attendees. It brings together people passionate about space to meet influential figures from the industry and, more importantly, one another. 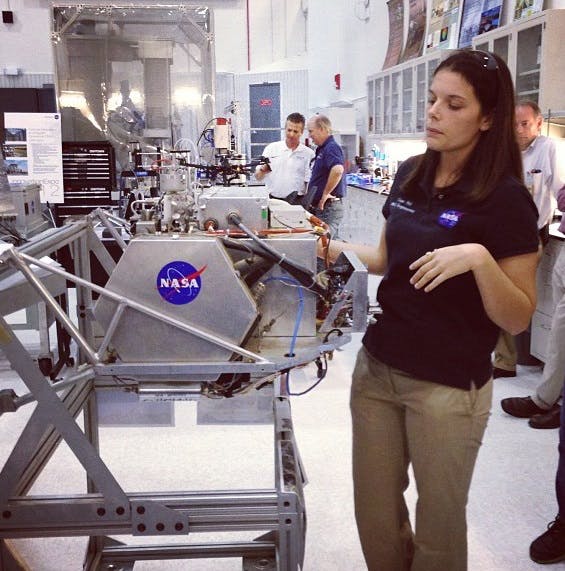 The alumni manage the NASATweet.com wiki, where they’ve archived all of the events so far, noting for instance the list of participants, their accounts of the events (such as blog posts, photos, and videos), and speakers. There are even guides on what to wear and bring, as well as a page dedicated to the geocache sites where attendees leave treats for others.

Not only has NASA Social cultivated a strong community of attendees, some of whom organize non-NASA-affiliated Tweetups among themselves, it’s helped some decide what they want to do with their careers.

“We’ve had at least a couple of people say they’ve applied to be astronauts, or they’ve gone back to school to get a degree that’ll make them able to apply,” said McGregor. “We’ve had people who worked in engineering who didn’t know what they wanted to do but now know they want to work in space and are now doing that.”

Thanks to McGregor and her colleagues, NASA Social attendees like Luciano are part of a lasting community that’s taken off into a life of its own.