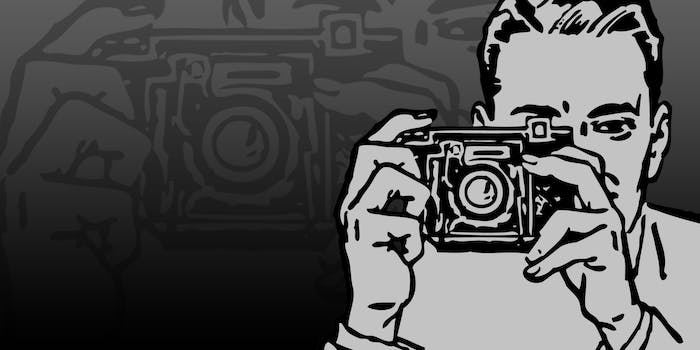 YouTubers are puzzled by this invasive and unusual series of videos.

An anonymous man has been walking up to people and pointing a video camera in their faces.

“Surveillance Camera Man” is the YouTube and Liveleak channel of a man who has been harassing strangers on the street for at least a year now. He released his latest video early Tuesday morning.

His videos follow the model of several other YouTube channels where uploaders harass and annoy complete strangers hoping to get a reaction. When confronted, the uploaders often proclaim that it was all just a social experiment or project. It’s easy to draw parallels between these videos and the equally questionable prank videos littering YouTube.

Surveillance Camera man doesn’t target any particular demographic in his videos, though he does seem very fond of capturing footage of homeless people and shoppers. When asked by people why he is filming them without their consent, his response is always either “Why not?” or “There are surveillance cameras everywhere, filming you all of the time.”

Surveillance Camera Man has not stated the purpose of his YouTube channel, but viewers have surmised that he’s attempting to document the visceral reactions ordinary people have to a surveillance camera when it is up close, in their face, and being held by a person they can see, even though they essentially consent to being surveilled every time they leave their homes.

On the surface, it would appear that Surveillance Camera Man doesn’t seem to care much about the legality of his videos—there are just as many filmed in private establishments as there are out on the street—but this may not be the case. As a few YouTube commenters have pointed out, he regularly removes and re-uploads his videos with legally questionable material edited out.

The identity of Surveillance Camera Man is still a mystery, but as some have pointed out, his videos have all been filmed at locations on or around the campuses of the University of Washington and Brown University. This has led to suspicions that he may be a student at one of those institutions or a Seattle or Providence resident.

Others have gone a step further, speculating that the videos are all staged and that we, the viewers, and not the people in the videos are the ones being trolled. People claim to recognize some of the subjects in front of the camera as actors from College Humor videos , raising the possibility that most if not all of what Surveillance Camera Man captures is fake.

However, the videos are taken down and edited so often that it’s hard to tell whether or not he edits out the faces of actors as they’re recognized.

Around the web, opinions of the YouTube channel have been mixed. Some support the idea of the project, arguing that, because everyone is under surveillance all the time anyway, it doesn’t matter whether it’s the government or this guy doing it.

Others rightfully point out that there is a difference between security surveillance outside of a bank and a stranger filming a video of you that you can be certain will be posted online for unknown purposes. Some still think the whole thing may be performance art and should be treated as such.

Whatever Surveillance Camera Man’s motivations may be, ultimately he seems to just be trolling for views. It’s hard to believe that there is a noble aspiration in any of his videos when he repeatedly interrupts the same college classrooms, places his camera extremely close to strangers’ faces, and feigns confusion when people get uncomfortable and angry. His videos amount to street harassment dressed up as social advocacy or art.

There may be truth to the assertion that there is too much public surveillance, but that is a separate argument. The way Surveillance Camera Man is trying to raise awareness of this issue—if that’s what he’s even doing—is all wrong.