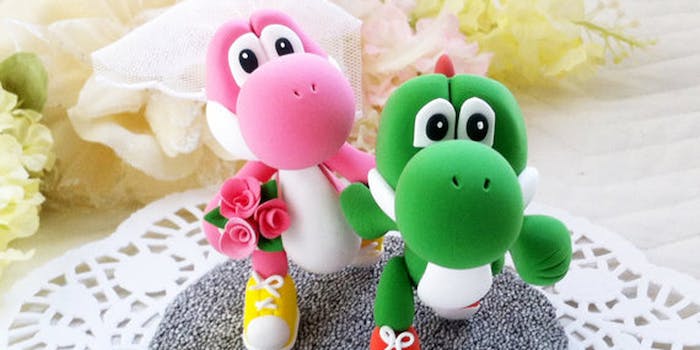 This Super Mario World marriage proposal is on another level

A clever geek modified the Super Nintendo to propose to his girlfriend in grand style.

As YouTube proposal videos go, there are few nerdier than hacking an old video game to express your desire to spend the rest of your life with someone.

A video by B Golds shows how he proposed to his now-fiancée Diana this week. The couple giggles excitedly while replaying the hacked version of the first level of the Super Nintendo classic Super Mario World, minutes after he’d popped the question.

The romance didn’t end there, however, as the husband-to-be had another trick up his sleeve. He uploaded the first song the couple danced to after their engagement, a “collection of music composed in a synthetic orchestra and spliced together from Steven Wilson, Frank Sinatra and Dennis McCarthy (Star Trek).”

It’s the latest in a line of gents using their game-modding prowess to pop the question.

This Legend Of Zelda: A Link To The Past clip not only features a proposal, but turns Princess Zelda into the hero.

There’s no reaction video in this Portal 2 proposal, but it uses the sarcastic tone of the GLaDOS computer’s voice perfectly.

This Minecraft rollercoaster of love is just delightful.

Little Big Planet is just about the cutest game around. That, along with its level creation tools, has borne many YouTube proposal videos.

And lastly, another Mario proposal. Just because.