Georgia newspaper burned by fake story about the sun exploding

That was a close one.

In what would certainly have been the journalistic scoop of an alarmingly shortened lifetime, the Athens Banner-Herald reported Monday morning that the sun had exploded.

The news item, which was relayed across social media channels, took the form of a breaking news alert: “This is the emergency broadcast system,” it read. “Please ignore this message as always. BTW, the sun just exploded, and we’re all about to die.”

After deleting the headline and launching an investigation as to its provenance, the Banner-Herald was forced to run the best retraction you’ll read all year. 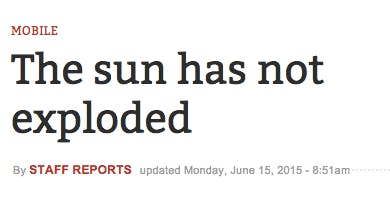 “We’re currently trying to determine what happened to ensure it doesn’t happen again,” said Joel Kight, Director of Digital of the Banner-Herald, who added, “And to our knowledge, the sun has not exploded.”

And it’s a good thing, too—Mondays are tough enough as is.