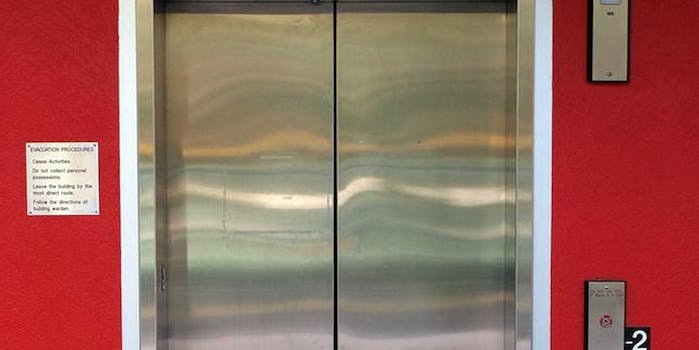 An Aerosmith ballad calmed down 9 students trapped in an elevator

"Love in an Elevator" gets no love?

For many people, getting stuck in an elevator is tantamount to being buried alive. The last thing you’d be thinking about is which Aerosmith song you’re going to sing to pass the time.

For nine students who became stuck in an elevator at the University of the West of England in Bristol, that was apparently the plan. In this short clip, they belt out the chorus of Aerosmith’s prom ballad “I Don’t Want to Miss a Thing” and, sadly, not “Love in an Elevator,” which seems like a missed opportunity.

People who were actually stuck in the elevator took to Reddit to recount their experiences:

I was one of the guys stuck in this lift haha, it’s Mendip Court on Frenchay Campus at UWE in Bristol. Everyone was pretty drunk so it was just funny, although we were stuck in there for over an hour so by the end one girl was panicking quite a bit.

Well, at least everyone was pretty drunk. No other songs were mentioned, though. Maybe it got kind of dark.