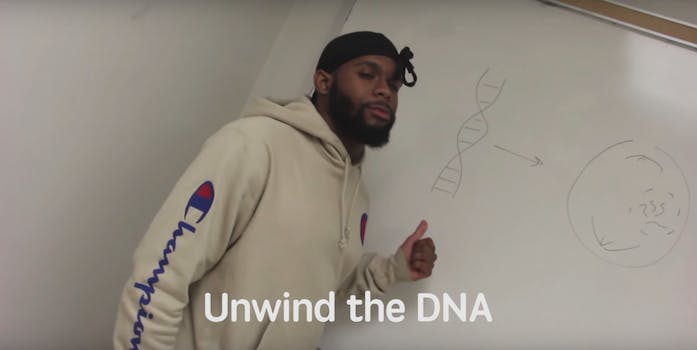 This rap about DNA might just help you pass that big test.

When a professor offered to curve students’ grades if they made a music video about any of the topics covered in class, Julien Turner, a student at Morehouse College in Atlanta, rose to the challenge and then some.

His music video about cell reproduction is not only total fire, but also super informative.

Sure it might not be on the same level as Kendrick Lamar’s DNA video, but then again not everyone can afford Don Cheadle.

It does however contain lyrics like “Metaphase chromatids meet at the heart/Anaphase chromatids are pulled apart/Telophase forming of membrane will start/While the cell starts to pinch back apart” so it’s clear Turner has some skills.

People on Twitter were duly impressed. In less than 24 hours the video has been retweeted more than 50,000 times and liked over 100,000.

trying to remember the lyrics while taking the final pic.twitter.com/e91jvPbWc4

Turner might have had an advantage on this particular assignment. He’s also an amature film maker with a couple of shorts already under his belt. In fact his short film Pseudo, a story about race and mistaken identity, has already won some awards.

Hopefully Turner gets an A in his class, but even if he doesn’t it seems like he’ll be fine. He always has either his music or film career to fall back on.