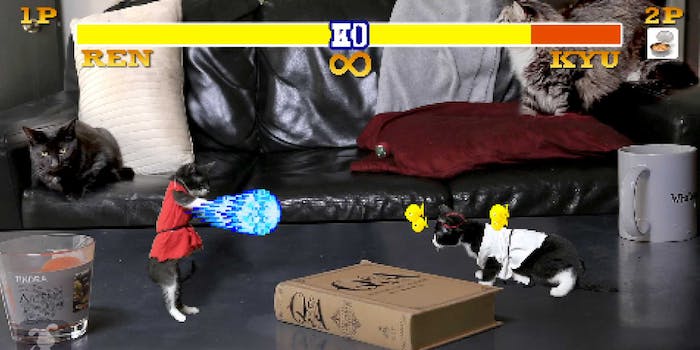 Watch cats duke it out in this cute Street Fighter parody

Like a Super Nintendo version of Street Fighter II, cats Ren versus Kyu get into a full-on brawl, complete with high kicks and fireballs.

Now we know what our cats get up to while we’re not at home.

Like a Super Nintendo version of Street Fighter II, cats Ren versus Kyu get into a full-on brawl, complete with high kicks and fireballs.

Kyu takes the first round in “The Feline Warrior,” but these things are rarely ever settled with one fight. They see fish when they’re knocked down and throw some more fireballs at each other while two other cats watch the fight from the comfort and safety of a couch.

They might have made it out to fight another day, but the house is a different story.

They even have their own bonus round: Defeat the giant ball of yarn—that is, if they don’t get distracted.