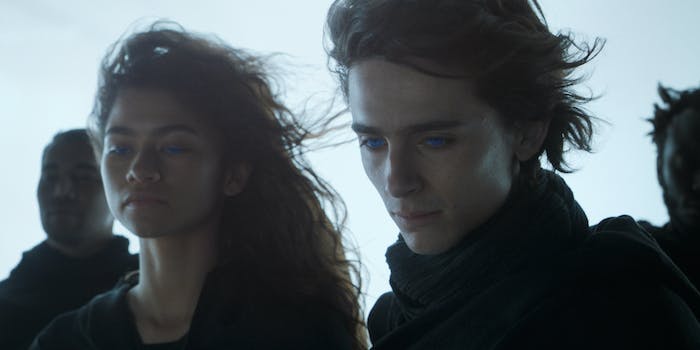 This week in streaming: The ‘Dune’ sequel is happening

Plus reviews of 'Last Night in Soho' and 'The Velvet Underground.'

The Dune sequel is happening

From the moment that the end credits started rolling for Dune—the first half of Denis Villeneuve’s planned adaptation of the Frank Herbert novel—in my press screening, I knew I wanted a sequel. Dune, which arrived in theaters and on HBO Max last week, ends on a cliffhanger, which I’m sure fueled part of it, but it’s such a vast and rich world that does fascinating things even as the film exists within the confines of a Chosen One narrative that the substance won me over, too. I fell in love with Herbert’s Dune novel over the summer, and the 2021 version captured a lot of what I loved about it. (I haven’t watched the 1984 Dune film yet, but regardless of how much David Lynch hates it, it is on my list!)

Dune has its problems, and it’s unfortunate that the creative team has been—on the rare occasion that they’ve actually been asked about it—rather dismissive about criticisms over Dune’s Islamic and MENA cultural appropriation that has its basis in Herbert’s novel and are still prevalent in the film. But I also really wanted another trip to the world that Villeneuve, DP Greig Fraser, and the countless crew members crafted.

On Tuesday, after Dune racked up more than $40.1 million at the domestic box office (and more than $200 million worldwide), Legendary Pictures put us out of our misery by finally green-lighting Dune: Part Two. Little is known about the sequel so far apart from a few key details. We know that the release date for the sequel is Oct. 20, 2023. We know the fact that Villeneuve, who noted that “it was a dream of mine to adapt Frank Herbert’s Dune” in a statement, is returning. And we know that the film’s exclusive theatrical window was reportedly part of negotiations. (Timothée Chalamet’s reaction to the sequel was, unfortunately, nowhere near as amusing as the one alerting us to Dune’s imminent arrival.)

We’re probably still a ways off from finding out anything more substantial. (Start your fan-casting for Alia, Princess Irulan, Feyd-Kautha, and Emperor Shaddam IV now!) But if the internet is any indication, there is still so much about the Dune that we have to dive into, whether it’s learning about the wild stuff that happens in the sequels or getting into Duncan Idaho once you get over the shock of his silly sci-fi name. And the memes? Oh, the memes are unbeatable.

Next time you book, let Dollar Flight Club do the heavy lifting. They keep a close eye on flights out of your favorite airport. When they drop to 60 to 90% off, you get an alert so you can cash in on the deal before everyone else gets wise to it. Best of all, it’s $1 to try the club. Expect the savings to pay off with your first flight.

Last Night in Soho arrives with a strict spoiler warning, making things tricky to discuss because the final act is when some of the key problems set in. Suffice it to say that Edgar Wright (never exactly known for his female characters) is an awkward choice for the material at hand. Beginning as pure escapism, Eloise’s (Thomasin McKenzie) 1960s dreams become more of a nightmare, following Sandie (Anya Taylor-Joy) into a life of vice. It’s a classic “fallen woman” narrative that echoes numerous movies since the dawn of cinema, but it offers little in the way of interesting insight.

Bizarrely, the script barely engages with something that should be a central theme: The contrast between real 1960s London and Eloise’s idealized view. Her dreams reveal that Soho has a dark side, but that isn’t exactly a shock. Soho is famously London’s red-light district. Otherwise, the film continues to revel in 1960s fashion and music, featuring a jukebox soundtrack of vintage pop songs. Wright is more interested in making things look and sound cool than in critiquing Eloise’s “born in the wrong era” mindset.

Last Night in Soho debuts in theaters on Oct. 29.

The Velvet Underground is a trippy entryway into an influential band

The Velvet Underground never achieved the level of success as other bands like The Beatles or The Rolling Stones; in fairness, it’s not really even fair to compare them. But they were arguably just as influential: According to famed producer Brian Eno, “The Velvet Underground didn’t sell many records, but everyone who bought one went out and started a band.”

Haynes might not have started a band after listening to The Velvet Underground, but many of Haynes’ previous films—from the Bob Dylan biopic I’m Not There and Velvet Goldmine (which included fictional characters based on the likes of David Bowie, Iggy Pop, and Velvet Underground frontman Lou Reed)—try to push some of the same limits the band saw in its music.

The Velvet Underground is out in theaters and streaming on Apple TV+.