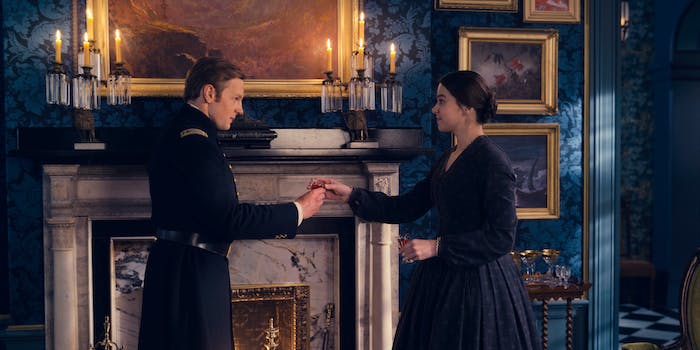 This week in streaming: Saying goodbye to Apple TV+’s ‘Dickinson’

Plus: Reviews of ‘The Harder They Fall’ and 'Eternals'.

An ode to ‘Dickinson,’ an underrated show

Since Dickinson premiered on Apple TV+ in late 2019, I’ve talked about it to anyone who would listen. The show, which follows the early adult years of the poet Emily Dickinson, feels intimate, like it was created for a small group of people. Although it takes place in the 19th century, characters use phrases like “such a Sagittarius” and “good vibes only” while dressed in gowns and suits that fit the era. There are sex scenes set to modern music. Emily (Hailee Steinfeld) takes imaginary carriage rides with Death (Wiz Khalifa) while the two ponder life and, well, death.

Its best moments focus on the writing process and how much of being any kind of writer involves looking for inspiration and trying words out. Throughout each episode, Emily’s experiences spark revelations, which appear on the screen as handwritten text. It sometimes takes her the whole episode, or several episodes, to complete her thoughts. Dickinson also puts Emily’s relationship with her friend and sister-in-law Sue (Ella Hunt) front and center. Historically, Emily and Sue were believed to have romantic feelings for one another—as documented by love letters that Emily wrote. Dickinson doesn’t hold back in its depictions of their relationship, showing Emily and Sue sneaking away to make out or declare their love for each other.

Dickinson’s third and final season premieres this Friday, Nov. 5 with the first three episodes. With the Civil War as its backdrop, and parallels to our current mid-pandemic world, the end of this incredibly nuanced and well-written show is superb. I will miss it a lot.

Take the stress out of styling yourself

Let’s face it, after so much time at home this past year, putting on real clothes is… difficult. Let alone choosing new styles! Meet Qatch, the personal stylist that makes it easy to find clothing you’ll love—all via text.

After taking a short quiz, you’ll get a weekly text of 10 recommendations with pieces sourced from over 100+ popular brands. With a heart (

), Qatch learns more about your style to recommend pieces just for you. Join for FREE today and get 20% off in your first text!

Eternals, the third Marvel film of the year, arrives in theaters this Friday. While fans are looking forward to it, critics were not impressed. In fact, it’s the only film in the MCU to receive a “rotten” rating on Rotten Tomatoes; it’s currently at 57%.

So what are the movie’s biggest issues? As staffer Gavia Baker-Whitelaw wrote in her review, the characters “are half-baked, and much of the film’s dialogue is distractingly stilted. At a rough estimate, 70% of the Eternals script is exposition.”

However, she says, it’s a “weirder and more ambitious concept than most MCU movies, and it offers a truly diverse cast.” Ultimately, though, the film falls flat. Eternals will not be immediately available on Disney+, so if you want to stream it, you’ll have to wait at least a couple of months.

‘The Harder They Fall’: Netflix’s star-studded Western is incredibly fun

It’s hard to believe that The Harder They Fall is director Jeymes Samuel’s first feature film. He has plenty of fun with the camera in this punchy, 19th-century Western—a film that’s stylish but not shallow, channeling a ton of star power to balance out its slightly overlong runtime.

Starring Jonathan Majors, Idris Elba, Regina King, Zazie Beetz, and LaKeith Stanfield, The Harder They Fall offers up an energetic crime caper about two gangs feuding over some stolen cash. Majors leads the cast as Nat Love, an outlaw hero whose parents were murdered by the dastardly Rufus Buck (Elba). The film’s Old West sets have the bright lightning and rainbow palette of a music video, and there are about 10 different scenes where the characters pose for a hero shot. It’s a true crowd-pleaser with better action sequences than many of Netflix’s action movies.

Now playing:  “Be Mine” by Alice Boman