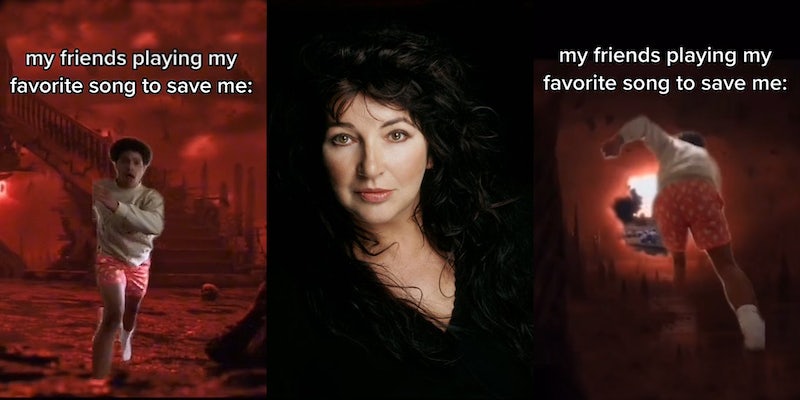 'Please tell me why we're gatekeeping a 37 year old song.'

One of the biggest gifts Netflix’s Stranger Things has given its younger fans this season, along with a brand new fear of grandfather clocks, is an introduction to 80s icon Kate Bush and her classic song “Running Up That Hill”.

With its wistful, minor key and a desperate yearning for understanding, “Running Up That Hill” is just as appealing to teenagers and college kids now as it was when Bush first released it back in 1985—leading to the song reaching number one on iTunes this week, and climbing the Spotify rankings like nobodies business.

Its also been dominating on TikTok, with people using it for everything from moody, personal posts to explosions of love for the artist and the series.

@gyugeombear no cause that scared the sh!t out of me 😭 #strangerthings #strangerthings4 #katebush #max #sadiesink #80s #fyp ♬ Running Up That Hill (A Deal With God) – Kate Bush

Some Kate Bush fans were really excited to see a musician and a song they love hitting it big with a new generation.

But, as always whenever a piece of media from the past jumps back into the spotlight, some fans are unhappy about it, claiming their beloved artist is being “tiktokified”.

Some have even been complaining about Kate Bush “going mainstream” because of the show, a claim some social media users were quick to point out makes no sense, as she’s produced numerous top hits over her career.

Sure there’s now a mainstream resurgence of interest in her thanks to Stranger Things, but the woman was a chart-topping legend back in the day.

Fortunately, it seems like one thing we’re not doing in 2022 is tolerating gatekeeping.

With Kate Bush fans of all ages, including some who were around when she first launched into the British music scene back in the 80s, rallying to the defense of those just discovering how much they love her music.

love kate bush so much

And it seems like some people are even having fun with it.