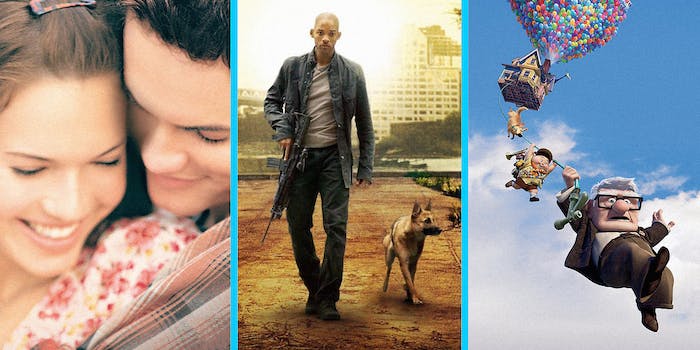 It's often more than just a movie.

Movies have the capacity to make us feel everything and nothing at all, but oftentimes, as a recent meme shows, they can be really good at making us sob.

As far back as March 23, the phrase, “stop crying, it’s just a movie” started appearing on Twitter along with at least one screengrab proving otherwise. It’s both a play on the perceived connotation that it’s kind of silly—or even a bit pathetic—that a movie can make you cry while the response given is seen as an exception to that rule.

The movie cited by @wtffatii2 is Five Feet Apart, a drama centered around two people with cystic fibrosis—and, at least on paper, a textbook definition of a tear-jerker.

Hundreds of people quoted @wtffatii2’s tweet with their own response and began a chain response sharing which movies made them cry.

One popular example? The first 10 minutes of Up, a sequence in near-total silence that depicts the decades-long relationship between Carl and Ellie up until her death.

Marley & Me, a dramedy in which a pair of newlyweds adopt a mischievous dog and follows them over the years. (Spoiler alert: The dog does indeed die by the end of the film.)

Many of them involved the death of a character—or someone important to the character—and included a mix of animated and live-action movies. The scale of the movie doesn’t matter, either: The movies that make us cry can be giant blockbusters, international films, the latest Disney or Pixar release, and indie darlings.

Even Brand Twitter got involved as NASCAR posted its own version of the meme by using a screengrab from Cars 3 in which Lightning McQueen crashes mid-race.

What is it about these movies that make us cry? It really depends on the person, their experiences, and the movie at hand. But if this meme is any indication, perhaps highlighting the fact that we might become emotional while watching a movie and cry at all can push back at the idea that doing so is a valid reaction to have to them.