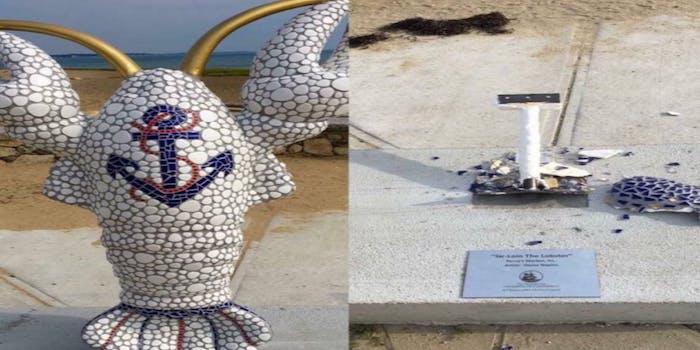 Not even lobster statues are safe.

You know who knows how to treat a lobster with respect? Plymouth, Massachusetts. The location of the first pilgrim settlement had the sheer audacity to erect a statue of an ocean animal that doesn’t get the adulation that it works so hard for. They could’ve erected a statue of Shamu.

They could’ve paid homage to Dolly the sheep.

They could’ve even built something in honor of the fallen lion who also doesn’t get enough respect.

Instead they chose to honor the lobster, and that took some guts from a state that isn’t exactly known for treating lobsters with the upmost respect.

So why did someone steal “Sir Loin,” the only thing Plymouth had going for it? This is just adding fuel to the “lobsters get no respect” fire and has set the crustacean back 50 years in terms of public perception.

According to Boston Metro, arist Diana Naples “spent 100 hours creating the 150-pound structure.” The poor woman wanted to finally show the world that lobsters are more than food, and all her work was in vain.

Plymouth Area Chamber of Commerce Executive Director Kevin O’Reilly called the crime “deranged,” which it the perfect word for it. Only a truly crazy person would steal a piece of lobster art that does not belong to them.

It was also reported that the thieves “attempted to steal another lobster statue but failed.” Thank god. That would’ve been even more deranged than just stealing one.

People loved posing w/ Sir-Loin The Lobster but tonight the search is on for who stole it. Live in Plymouth at 6. pic.twitter.com/m6WNU94Cg5

Or, you know, maybe it was the 15-year-old police later arrested for the theft. But given that they still haven’t recovered Sir Loin, who knows?

Whatever the case may be, the statue needs to be returned, and we as human beings need to put all crustaceans on the pedestal they deserve.