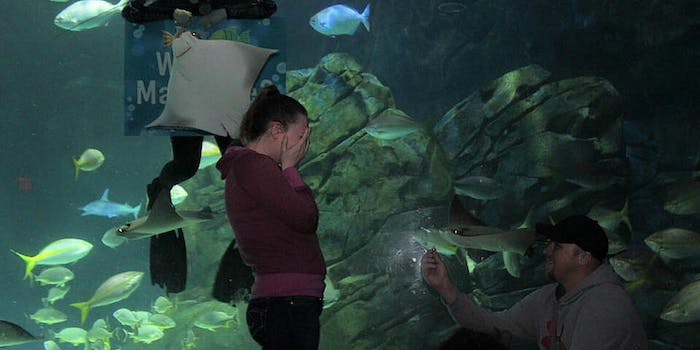 Yeah, stingray. Everybody sees you.

When it comes to animal photobombing that ruins whatever moment you’re trying to record, the research is clear. Squirrels are the cutest, hippos are the friendliest, sharks are the most pretentious, and giraffes are the most passive-aggressive.

But if you’re looking for the most annoying photobombing animal, you need look no further than the stingray. Yep, the freakin’ stingray who won’t get out of the way of your marriage proposal no matter how many photos you take and no matter how many threats you levy.

Every photo? Yep, it seems like just about every photo.

But let’s give the stingray the benefit of the doubt. Maybe it’s just a really friendly animal and wanted to share in the good news. Maybe the stingray is just a little overenthusiastic in wanting to celebrate the upcoming nuptials.

Nice try, stingray. But we know the truth. You and your photobombing ways are just annoying.