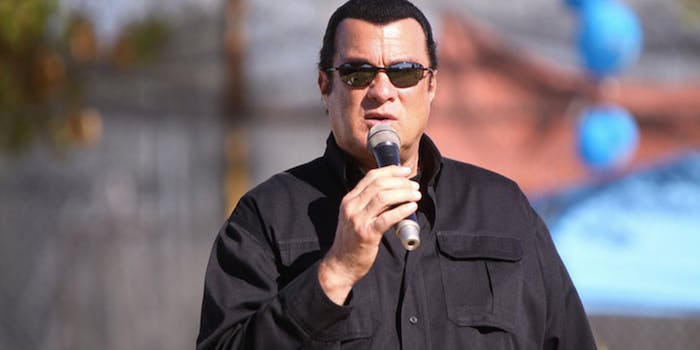 The silence is deafening.

Steven Seagal is a lot of things, but “good at the Internet” is not one of them. For proof we offer this patently self-promotional, disastrous Reddit AMA, in which the washed-up action star, as one participant noted, “answered 12 preschool level questions then ‘ran out of time.'”

Since the queries addressed hold no real interest for us—except for the part where he claimed to be black—let’s review the 12 tough questions this tough guy (or, more realistically, his long-suffering and abused assistant) pointedly refused to engage with in any way. Wonder why!

1) What kind of pants were you wearing when Gene LeBell choked you unconscious and caused you to shit your pants?

See, this is something we really wanted to know.

2) Jean Claude Van Damme has recently stated that he believes he would, and I quote, “wreck you” in a battle of martial arts. What is your response?

Amazing that he didn’t even try some macho posturing here.

3) Hey Steve, what exactly happened to you during your kidnapping by the Gambino family in 2001?

Understand why this is difficult to talk about. Still curious.

4) Can you explain how you “developed” the front kick that Anderson Silva used in his UFC fight? That same kick has it’s origin from old old Okinawan Karate(mae geri) which originated from Chinese boxing. In what way do did you “enhance” it and made you feel it was now “your version” of the front kick?

5) Any regrets about driving that fucking tank into a guy’s house and killing his dog?

Oh man, we almost forgot about that!

6) What’s the weirdest thing you’ve ever done to your Russian sex slaves?

7) Do you consider yourself a Buddhist? Which aspects of Buddhism address you the most?

Honestly, this seemed like a softball. Guess he was stumped.

9) You are the reason I have a ponytail, what powers can I expect in the near future?

Damn, not encouraging at all that he ignored this.

10) How did you come to be friends with Vladimir Putin, and what’s he like in person?

11) This is a really shitty AMA. Would you consider answering all the questions, including the ones that might be uncomfortable?

12) Steven, you’re my absolute hero, I’ve watched everything you’ve ever been in, from Nico, to Out For Justice, to Exit Wounds, to Attack Force, to Lawman, to getting laughed at in live interviews wearing ballistic glasses, to get accused of kidnap and torture, to not being able to fit through doors any more. My question is, can I suck your dick or watch you fuck my sister?

You know what? Doesn’t even need a reply. The question is a masterpiece that stands on its own. Just like every Steven Seagal movie.