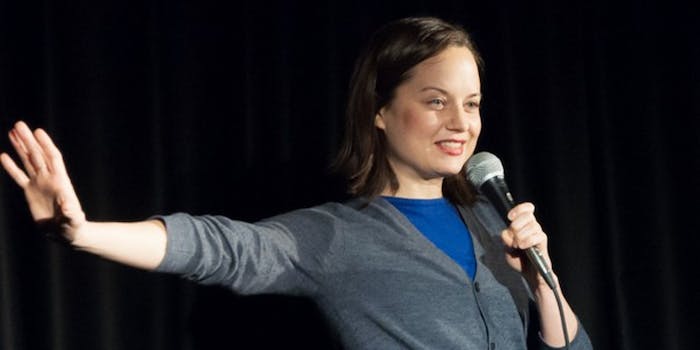 The surprising freedom of standup comedy under Chinese censorship

China doesn’t exactly leap to mind when people think of standup comedy, but a group

of comics in Shanghai aim to change that.

American Turner Sparks and an Australian named Andy Curtain, is mainland China’s first and only full-time standup comedy club. The venue puts up English and Chinese shows five nights a week to

audiences of both expats and, increasingly, locals in Shanghai and neighboring Suzhou.

I’ve been performing with KFK for about six months—mostly in English, though I did do it once

in Chinese—but have been their fan since I landed in Shanghai two years ago.

The first time I went to a KFK show, tucked away in a windowless back room of a bar, just

like most comedy rooms in New York City, I spent the entire time (1) laughing and (2)

that famously censors it. I figured it was either some kind of expat privilege or everyone

on a Sunday night open mic.

somehow getting a green light to exercise freedom of speech in China. Instead, they’re doing

comedy that happens to not be political. And because it’s funny and insightful, no one in the

audience can sit with their arms crossed, thinking, “But where’s the political humor?”

the direct way many Americans imagine it might. Unlike in the United States, where politics is a

prominent if not constant part of daily conversation, in China it’s just not something that

comes up. The effect is subtle, not overt.

This is not to say it’s not powerful. Being able to set the agenda for an entire national

conversation is a deep sort of power the CCP currently wields over China. Comedy, along with

of political discourse and debate in most developed democracies. In the U.S. we consider this

kind of debate essential for the health of our country. The awesome ability of the

Chinese government to mute such debate cannot be overstated.

So how does it feel to do comedy in this muted world? Totally normal.

When it came time

for me to prepare my first minutes of material, I never once thought, “Oh, I shouldn’t say this,” or “I wonder if this is allowed?” I had so many things I wanted to talk about, and because politics

is not something you just sit around talking about in China (and I say that as a professor of political science!), it simply didn’t occur to me to write material criticizing the government.

So how does it feel to do comedy in this muted world? Totally normal.

world in China, and society as a whole, is too busy thinking about other things besides political

dissent. Sure, this could change in a flash, but right now this is how it feels. Not being able to talk critically about politics sounds like an fatal limitation in the standup

world—especially to Americans, where politics are deeply ingrained in our national psyche. It

makes it sound like all conversations and, by extent, standup sets are about sports and the weather.

But there is no end to the other topics out there, and when you have an infinite supply of something,

I realize my American citizenship may well be

revoked for writing this.

The idea of political correctness in the U.S. is a useful analogy here: One of the great things

about comedy is that it explores and pushes societal boundaries. In the U.S., some of these boundaries exist around topics of rape and race. Comics are certainly free to talk about these

subjects, but good ones do so with care—and if they don’t, audiences, other comics, and even

the Internet will turn on them.

I asked Joe Klocek, a comic based in San Francisco who did a 3-month residency with KFK

in 2014 to describe how censorship in China affected his material. He explained: “In America, the

censorship seems to be self-generated with the words, ‘I’m offended.’ As soon as someone says

that, it shuts down any more conversation about the topic.”

Every time a kid with a clipboard asks me to sign a petition to make San Francisco affordable I ask how & when they’ll make an earthquake.

In China, on the other hand, Klocek said, “the

government censors information, but the people know that and find ways around it.”

U.S. compared to China are very different, the feeling of not wanting to engage in a sensitive topic

unless I really have something I need to say about it is similar in the two countries. Just as in the

U.S. I have zero desire to say something racist on stage (it literally feels unthinkable), in China I

am not working up a 5-minute set about Tiananmen.

“In America, the censorship seems to be self-generated with the words, ‘I’m offended.’ As soon as someone says that, it shuts down any more conversation about the topic.”

The situation is, of course, different for expats and locals. As an expat, I am a guest in

China and, censorship or not, it doesn’t feel appropriate to criticize my host country.

Mohammed Magdi, an Egyptian comic who has been performing in Shanghai for two years,

said that “talking about sensitive topics would turn an audience off anyway. They’re not there to

hear about a foreigner’s views on the CCP; they want to hear about your culture, background and 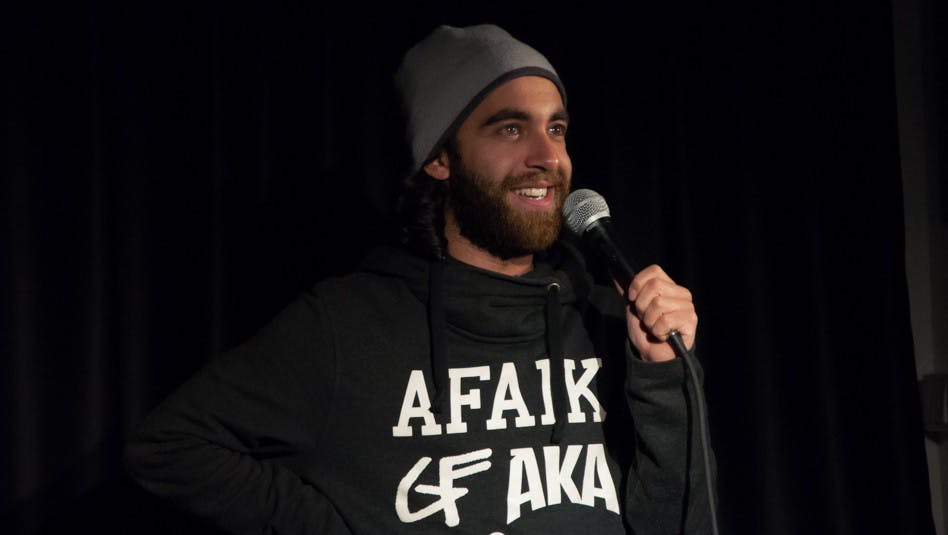 I can’t speak for the experience of local comics, but I asked a few Chinese comics in the scene

for their thoughts. Storm Xu, a longtime KFK headliner in English as well as host of a weekly

Chinese open mic, feels that outsiders are “over concerned” about censorship’s effect on standup

“Of course if I perform in theaters they will go through my jokes, but it is just like

being on American TV; they have standards and practices,” he said.

Gillian He, a regular at both the

English and Chinese open mics, says that her focus when it comes to censorship is actually more

about non-political issues: “Chinese don’t like dirty or sexual jokes,” she remarked. American

comic Paul Johnson also told me that in his experience, jokes that make fun of grandparents don’t

really fly in China, either. 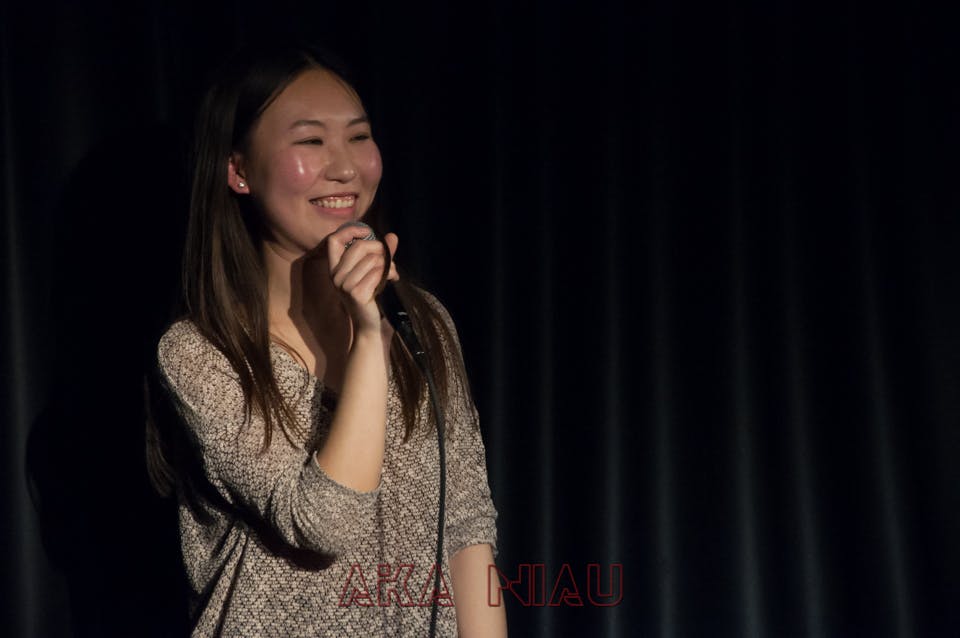 But there is room for political discourse in China’s standup scene.

pollution and corruption, thereby inviting citizens and even standup comics to join the

It’s a sort of permission slip for all of us at KFK to say: OK, cool, we can talk

While, as mentioned above, most expats don’t feel like it’s our place to be critical,

many Chinese citizens’ views on race and foreigners. Again, just as American comics

push boundaries of sensitive topics in the U.S., so it goes in China.

A temptation in the West is to conclude from this that standup is a secret, bubbling source of

revolution in China. Much Western media coverage of standup in China focuses on this very notion. According to KFK co-founder Andy Curtain, “there’s this obsession that it’s subversive

or politically motivated, usually in the hunt for an interesting—albeit fictional—story.”

Just as American comics push boundaries of sensitive topics in the U.S., so it goes in China.

Though it may well be the case that some Chinese citizens see standup as an avenue to revolution, in my

experience the focus at KFK is comedy.

Gillian He said, “my greatest motivation for doing this is to spread happiness to the

audience.” Storm Xu put it perfectly: “We just want to be funny, talk smack, like the rest of the

world.” his goal is “to make a living off standup

When I asked him about his goals for KFK, Andy Curtain told me, “Going to a

comedy show is one of the things you do when you visit New York. It would be amazing if one

day standup has the same cachet in Shanghai.”

While this may sound far-fetched to Americans, William Little, a veteran of the Chicago

standup scene who recently relocated to Shanghai, observed that things are “moving really very fast over

here, and the amount of tremendous artists, musicians, artisans, filmmakers, and craftsmen of all

Not bad for a country where, in 2009, KFK co-founder Turner Sparks Googled “open-mic

comedy in China” and “absolutely nothing came up.” 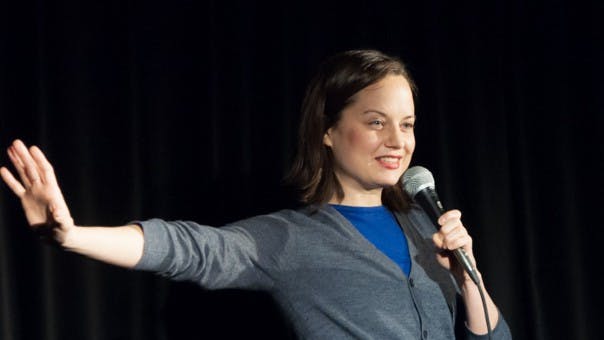 Science at New York University Shanghai. She is also a standup comedian and circus