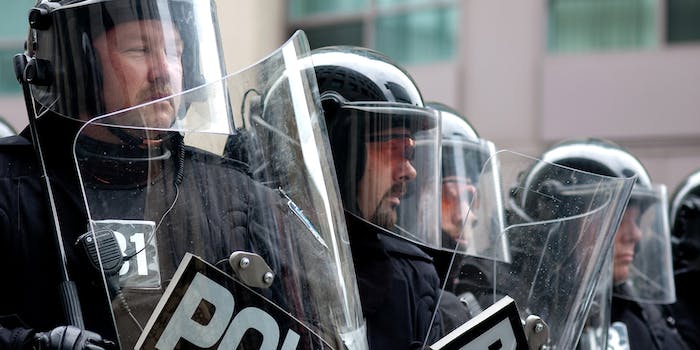 Just a few weeks after the fatal shooting of Michael Brown.

A police officer shot and killed a teenager on Wednesday night in St. Louis, Mo.

Eight and a half weeks before, and about 12 miles away, another officer, Darren Wilson, shot and killed another youth, unarmed teenager Michael Brown, sparking still-ongoing protests.

Police have yet to release the name of the young man shot Wednesday, but relatives have identified him as 18-year-old VonDerrit Myers, Jr.

Sources agree that a teenage black male fled an attempted “pedestrian check” late on Oct. 8, and an officer gave chase. What happened next is disputed: the official report is that the teenager fired at least three times at the officer with a firearm following a “physical altercation,” prompting the policeman fire 17 shots—though it’s unclear how many of these shots hit the teenager.

Others, however, claim otherwise: “He was unarmed,” relative Teyonna Myers told the St. Louis Post Dispatch. “He had a sandwich in his hand, and they thought it was a gun. It’s Michael Brown all over again.” St. Louis police say they have ballistic evidence and have recovered a firearm from the scene.

Officer working secondary in the 4100 blk of Shaw attempted a pedestrian check when suspect fled on foot. Officer pursued suspect.

The officer was not injured. A gun was recovered from the scene. The investigation is ongoing.

The shooting sparked immediate street protests of up to 300 people, the Post Dispatch reports, staging sit-ins on the street and chants including “black lives matter” and “hands up don’t shoot.”

Photos and videos of the angry demonstrations are being shared on social media using the hashtags #ShawShooting and #16shots.

Tensions have remained consistently high in the area ever since Wilson shot Brown in Ferguson, Mo., a St. Louis suburb, 62 days ago. Wilson has not been charged.