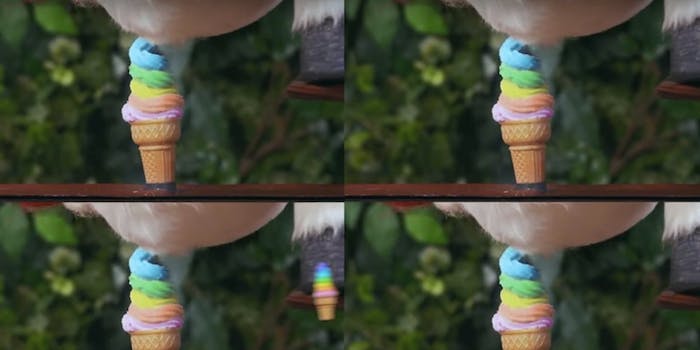 Squatty Potty’s pooping unicorn gets the autotune remix it deserves

'The creamy poop of a mystic unicorn' is your new chill winter jam.

When Squatty Potty dropped a commercial in early November for its plastic chair-like medical device, no one expected the company to become a viral meme. But thanks to a magical, big-eyed unicorn—and a soft-serve cone full of rainbow delights—the #SquattyPotty juggernaut is rocketing towards the Internet hall of fame.

The original ‘unicorn poop’ commercial has over 8 million YouTube views, and over 40 million on Facebook. Its Instagram account is stoked by fandom—yes, people take selfies with a tool designed to help them poop more easily. For a couple of weeks after the commercial launch, #unicornpoop was trending on Twitter. Though Squatty Potty had humble origins, begging for initial investments on Shark Tank, it is now firmly a thing.

The latest installment in the unicorn poop fantasia is an autotuned chillout slow-jam remix featuring everyone’s favorite straining unicorn and vaguely creepy, winking Prince Charming. Like so many other installments in the surrealist comedy canon, the latest video features smiling children who seem totally clueless about the weirdness around them.

Now let’s just hope someone comes along to save that poor unicorn soon—before it has an aneurysm.