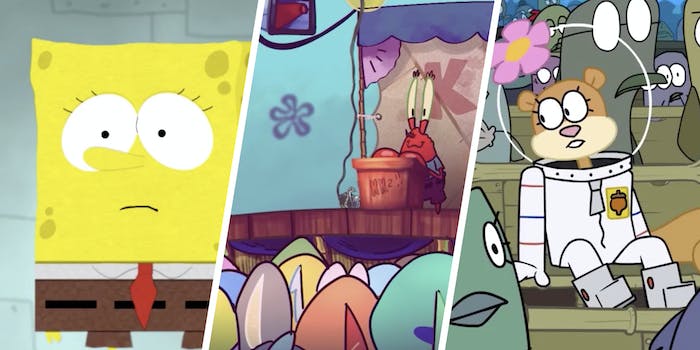 ‘It was a love letter to the franchise and what did Paramount do? They blocked it’: Outrage as ‘SpongeBob’ fan film removed on YouTube

'I think that summarizes Paramount's respect for fans.'

A fan-made recreation of The SpongeBob SquarePants Movie that was several years in the making found itself on the outs for several hours after it was flagged for a copyright violation by Paramount Pictures.

If you’ve seen the original SpongeBob movie, which was released in 2004 several years after the hit show debuted on Nickelodeon, The SpongeBob SquarePants Movie Rehydrated should be familiar. It’s the same story, same words, and the same scenes. Over the course of several years, hundreds of artists collaborated to record all of the dialogue from the film with a new voice cast, re-animate the film in a multitude of animation styles, and re-record all of the music in it.

“During the development of the film, we accepted submissions from animators and either denied/accepted them based on their submissions,” the hosts of Rehydrated, which includes Kane Patrick, Angel Gonzalez, Nick Mahoney, Alexis Weaver, and ThePickleMan, told the Daily Dot via Twitter direct message. “Apart from animation, the entire film was redubbed by our wonderful voice actors, sound editors, and musicians.”

The hosts say that they “are mainly driven just by our love of the show and the late SpongeBob creator Stephen Hillenburg,” who died in 2018 from ALS. It’s a sentiment that’s also echoed in the film’s disclaimer, which states that nobody was profiting from the film in any way and that everything that was seen or heard was created specifically for Rehydrated.

The filmmakers debuted Rehydrated on YouTube Sunday at 6:30pm ET. But just over a half-hour into the film’s premiere, the video was taken down. “This video contains content from Paramount Pictures, who has blocked it on copyright grounds,” the notice on YouTube read. The film’s Twitter account urged viewers that if they still had the video up not to refresh it and quickly informed them that they were working on getting the film up onto Newgrounds. (It’s still available on Newgrounds and split into two parts.)

The hosts of Rehydrated weren’t sure if Paramount Pictures (the studio behind The SpongeBob SquarePants Movie) was aware of Rehydrated’s existence, but “If they were aware, we were never contacted about it.” They did acknowledge that Viacom—the former name of Paramount, which owns Nickelodeon and SpongeBob—is pretty stringent when it comes to fan works.

“Viacom is infamously strict with fan content, however, we hoped that redubbing the entire thing would be enough to be considered ‘transformative’ under fair use,” they explained.

The issue, according to the hosts, directly involved the audio: The copyright violation mentioned that 40 minutes of audio from Rehydrated appeared in The SpongeBob SquarePants Movie.

Fans met the takedown with outrage, and the hashtag #JusticeForSpongeBob trended overnight as people called out Paramount, including some of the film’s collaborators.

“For the last 2 years, this dedicated team of passionate fans recreated the SpongeBob movie brick by brick with unique animation & voice acting,” Saberspeak tweeted. “It was a love letter to the franchise and what did Paramount do? They blocked it. I think that summarizes Paramount’s ‘respect’ for fans.”

Fans also used SpongeBob along with other properties like Dexter’s Laboratory to illustrate their frustrations over the copyright takedown. They also compared Paramount’s actions to Nintendo’s reputation for shutting down unofficial fan-made projects and called out the former company’s hypocrisy because it went after Rehydrated while ignoring full SpongeBob episodes uploaded online.

By Monday afternoon, the video was restored, and the hosts called seeing the rallying effort to get the video back online “absolutely gratifying.”