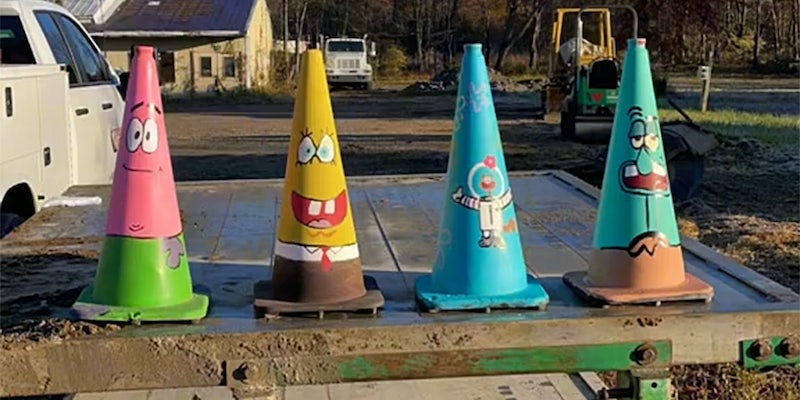 ‘We show up to work this morning, and someone painted one of our cones like Patrick’: TikTokers chronicle dueling sides of a SpongeBob cone display

It only took a few days for the algorithm and commenters to bring them together.

If some nautical nonsense be something you wish, look no further than a TikTok SpongeBob SquarePants traffic cone saga bridging two sides of the story together in a way that only TikTok can.

Construction around a pineapple under the sea? Not so much. On one side of the street, you have Amanda Stone, a TikToker who documented an ongoing construction project taking place in front of her home for weeks. One night, she had gotten bored and decided to take one of the traffic cones and painted it pink and green so it resembled SpongeBob’s best friend Patrick Star.

“Did I just steal a traffic cone and paint it like Patrick star and put it back like nothing happened yes, yea I did,” she wrote.

The following day, she took another cone and made it look like SpongeBob himself. When the paint dried, she filmed herself going across the street to place the SpongeBob cone next to a regular, unpainted cone.

Stone’s TikTok went viral, but not just for her boredom-fueled transformation of traffic cones into SpongeBob SquarePants characters. As it turns out, someone who worked at the construction site near Stone’s home found the Patrick Star cone and documented it on his TikTok account.

“We show up to work this morning, and someone painted one of our cones like Patrick,” TikToker mikeyp357 said as he turns the camera toward the Patrick Star cone. “I ain’t even mad.” In a second video, he noted that Patrick didn’t “look too mad about it either” about his best friend showing up.

Mikeyp357’s video also went viral, and thanks to commenters chiming in on both videos, he and Stone quickly became aware of each other’s role in the saga they were documenting. Stone’s video revealing the creation of her third cone—featuring Sandy Cheeks—included a quick, “Thank you, Mikey.” Mikey’s side of events included the caption “Thanks @amandacstone” as he filmed the reveal.

On day 4, when Stone’s cone art showed Squidward, Mikey referenced Stone by name and revealed how his colleagues and passersby have reacted to the cones.

“She’s done an awesome job. Everybody on the crew loves it, everybody that drives by loves it, the owners of the company love it,” he said. “I think it’s pretty cool. I’ve never seen nothing like that done before, and I’ve been doing this for a long time. And I think it’s exciting.”

After the Squidward cone dropped, Mikey and Stone met each other and posed for selfies, which they each posted on their respective TikToks.

“So I was finally able to meet Mikey,” Stone said in her day 5 video. “Super awesome and chill guy, did not charge me with vandalism for painting the cones, which was great and a relief.”

With praise from the construction company, Stone grabbed another cone, but between the rain and a lack of traffic cones without reflectors (she doesn’t mess with those), it took some time to obtain the cone for her latest creation (Mr. Crabs).

It was still raining on day 6, so Stone found a cone on her front porch when she came home. The cone, which Mikey placed on the porch, was smaller than the others, an indication of the direction he wanted her to go in.

“I guess I know what character he wants me to do,” she said before producing a cone of Plankton.

Day 7 saw Stone painting the cone to look like Gary the seasnail during the day.

And as promised, Mikey posted a photo of all seven cones together as they were about to leave the construction site.

“Headed to the home office!” he wrote.

The cones are now heading to a new home (presumably not Bikini Bottom). And as some people offered more requests in the comments of Stone’s video, others wondered how it all even happened.

“They had cones in my yard and I was like I’m gonna paint that and I did and now we are here,” Stone wrote.