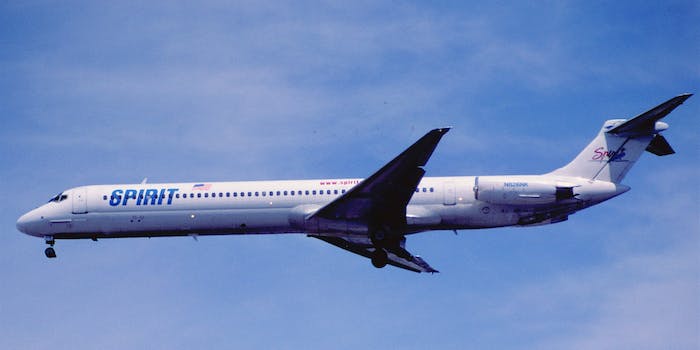 This is not how you hack viral marketing.

As the Internet continues to debate whether or not it’s acceptable to hack into someone’s online account, steal nude photos of them, and spread them all over the Internet without their consent (spoiler: it’s not), Spirit Airlines decided to take advantage of the buzz by sending its customers the following promotional email yesterday morning: 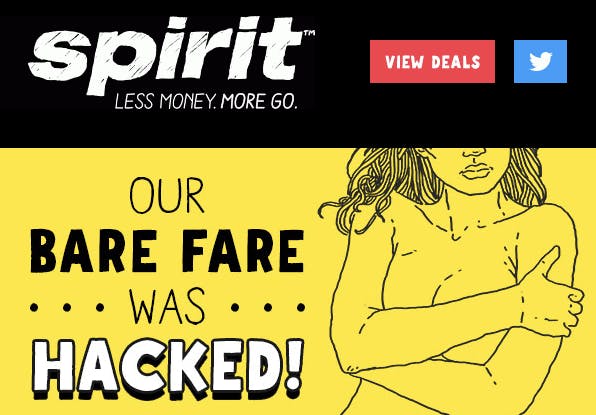 The email, which had a subject line that said, “Our Selfie Leaked Too…,” read in part:

We feel naked; you were never supposed to see this Bare Fare! It was meant for a special someone (who isn’t you). Now it’s all over the Internet for you to take advantage of as you see fit. Scandalous! We thought the cloud was our friend, y’know, because we spend so much time flying with ’em. But now our private prices are on display! Bad for us; GREAT for you.

The joke makes light of the experience of having private photos stolen and disseminated for hundreds of thousands of people to leer at, perpetuates the idea that this is a “scandal” rather than a crime and an act of violation, and implies that something “GREAT” happens when someone else’s privacy is violated. Yeah, sure, it’s “just a joke.” But I’m not laughing.

But PCF wasn’t interested. Even though the Redditors raised over $6,000, the foundation removed their fundraising page and refunded the donations, releasing a statement that read:

A post appeared on Reddit late Monday afternoon, September 1, 2014. A Reddit user directed other Reddit users to make a donation to the Prostate Cancer Foundation without the Foundation’s knowledge. We would never condone raising funds for cancer research in this manner. Out of respect for everyone involved and in keeping with our own standards, we are returning all donations that resulted from this post.

After reflecting on the situation—as one Redditor put it, “Guys, we’re even worse than cancer”—they decided to try donating to Water.org, a charity that helps provide access to clean water in the developing world. But Water.org pulled their fundraising page, too. (As of this writing, the charity has yet to release a statement.)

Some media outlets reported this as Redditors donating out of “guilt” or “remorse.” I haven’t seen any evidence that that’s what motivated the donations. The original Reddit thread has been pulled, but here’s the text of Reddit’s Water.org donation page before it was taken down:

Due to the very fortunate events suddenly erecting in the last few days, Reddit would like to extend its thankfulness and return the favor. We know the feeling of being completely parched, only to have water leaked into our mouths. So we hold stiff in believing toward your cause… Puns and awful immature humor aside, to the owners of this website, we genuinely want to help you guys, and the people affected by their water situation. People have their reasons on why we’re donating, when in reality all we’re trying to do is make light out of a rather bad thing and have a few laughs about it. Which isn’t exactly the most noble of reasons to donate, but definitely shouldn’t be the reason of one’s donation being rejected.

The “awful immature humor” certainly masks any contrition that may be present.

Someone who truly feels guilty about participating in the sexual degradation of multiple women should immediately delete the photos from their computers and phones, stop visiting the subreddit dedicated to disseminating them, condemn everyone who participated in the theft, dissemination, and perusal of the photos, and publicly apologize to the women affected. And perhaps donate to an organization that helps victims of sexual violence and exploitation. But I’m sure that’s asking too much.

Plenty of people would (and probably have) condemned these charities for rejecting sizeable donations. To some people, money is money no matter where it comes from or what prompted its donation. However, the fact is that charities refuse certain donations all the time.  For example, both Goodwill and UCLA rejected two very large donations from former Clippers owner Donald Sterling in the wake of the controversy over his racist remarks. Planned Parenthood rejected a large donation from noted misogynist Tucker Max. (I suppose I should’ve referred to him as “author and comedian Tucker Max,” but that seemed excessively optimistic.)

Charities can have a few reasons for making such a decision. For instance, being associated with an extremely controversial figure—especially a figure despised by many of the charity’s donors or beneficiaries—can ultimately harm a charity much more than returning a sizeable donation. But it can also be a much more personal decision made by people who cannot in good conscience use money that they feel was raised or provided unethically, even if that money would help others.

While the money donated by the Redditors was presumably raised in the way that individuals’ money is usually raised—>that is, going to work and collecting a paycheck—the donation itself was inspired by a flagrant (and illegal) act of sexual violation, and the collective tittering and high-fiving over that violation that the Redditors were engaging in.

No doubt the Prostate Cancer Foundation and Water.org faced a dilemma in choosing what to do with the money. They made the difficult choice, but the right one.

Spirit Airlines faced a much simpler dilemma. Use a silly, sarcastic current events reference in a promotional email, or find a different joke to use. I’m sure they employ plenty of people with the skills and experience to create snappy and effective marketing materials, people who could accomplish this even without stooping to the level of making fun of the victims of this crime. But they went for it anyway.

Effective humor punches up, not down. There can be a good joke about this shameful incident, just as there can be good jokes about rape, about racism, or any terrible thing that disproportionately affects a certain group of people. But a good joke about the stolen nude photos would not make fun of the person who had the photos stolen, as the email appears to. It would make fun of the pathetic, cowardly people who think that a woman’s body—any woman’s body—belongs to them, go to such lengths to get what they want, and then turn around and blame those women for not having been “careful.”

I doubt anyone who received the Spirit Airlines email is going to consciously sit there and think, “OK, I guess hacking into someone’s iCloud account to find nude photos and then spreading them all over the internet is a totally normal and okay thing to do.” But in an environment where these jokes get made all the time, it promotes the status quo: that this is something to laugh off, that these women should’ve “known better,” and that men can continue to violate women in this way to “take them down a notch” or “teach them a lesson” or just for no reason at all.

Photo via Aero Icarus/Flickr (CC BY 2.0)