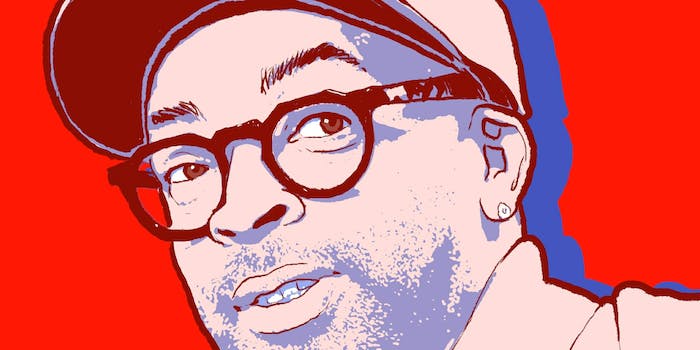 It's time to stop blaming the victim.

Lysistrata, the 411 BCE play that director Spike Lee uses as a framework for his new film Chi-Raq, about the growing violence in South Chicago, is recognized as satire. But now Lee is offering Aristophanes’ dramatic advice as tested fact that women can somehow prevent rape, and that’s a dangerous red herring.

During a recent appearance on The Late Show with Stephen Colbert to promote his film, Lee said: “I think a sex strike could really work on college campuses where there’s an abundance of sexual harassment or date rapes.”

Lee’s statement elucidates a collective propensity to preemptively blame victims instead of doing the heavy work of dealing with the entrenched attitudes that account for the one in five women being sexually assaulted during their college education.

Instead of dealing with the very corpus of rape culture, this attitude pushes us deeper into the murky waters where victims remain responsible for their rapes.

With campus protest posters reading “Sexual Assault Should Not Be a Part of My College Experience” and major institutions like the University of Michigan reporting that 22.5 percent of their female students have been sexually assaulted, it’s not a secret that rape is a firmly established element of our college atmosphere. Lee’s comment is more than just an inappropriate marketing of Chi-raq— it’s another example of celebrity pushing the problematic notion that victims can somehow prevent rape.

Instead of using his platform to encourage an international commitment to consent education, Spike Lee is putting the responsibility of reigning in rape stats on the people being attacked. Lee joins the chorus of prominent voices seeking to police the behavior of women under the auspices of “ending sexual violence.” Whether it’s about patrolling our drinking, our clothing, or when we navigate our urban spaces, this antiquated approach only reinforces self-blame while inhibiting victims from reporting. Instead of dealing with the very corpus of rape culture, this attitude pushes us deeper into the murky waters where victims remain responsible for their rapes.

When Spike Lee suggests on national television that women can prevent sexual assault by collectively going on a “sex strike,” he is saying that rape is about sex. It isn’t. Instead, rape, sexual assault and sexual harassment is about power, entitlement, and the multifaceted cultural underpinnings that green light toxic masculinity. It also takes the focus off the perpetrators; when we should be teaching college students how to not rape, we are telling women how to not get raped. This is an erroneous and dangerous concept, since rapes occur no matter how much alcohol a victim has drank, and no matter what she is wearing.

Like other attempts to reduce rape by limiting the expressions of women, in suggesting women go on a “sex strike,” you are fundamentally denying women self expression. Women should not have to stop engaging in, and enjoying, sex to reduce their risk of being raped.

A sex strike promoted by Spike Lee isn’t going to curb sexual assault numbers on American college campuses, and his prophecy that in “second semester it’s going to happen” is false hope.

It’s worth mentioning that while thanks to the brave work of victims like Emma Sulkowicz, our optics are tightly focused on sexual assaults occurring on U.S. campuses; rape is by no means limited to this small subsection of society. Rape happens in all countries, across all cultures and exists as a very present criminal act in many marriages and other intimate relationships. Rape does not just happen to college-age women. Sexual assaults are perpetrated against men, lesbians, transgender women, sex workers and children—groups who are immediately shut out of the victim category by heteronormative statements like Lee’s which immediately sets up a binary of straight woman as victim and hetero man as the perpetrator.

Sexual assault on our campuses is not some sort of Gordian Knot.

Rapes on college campuses will stop happening when administrators make consent a priority instead of a five-minute video thrown into Frosh Week. The numbers of sexual assaults will fall when we privilege victims over the celebrity of our football players. When victims, brave enough to come forward aren’t thrown to the wolves of social media, rape will happen less often. There will be less rape at our universities when campus adjudicators stop telling victims that it was their fault and when we report more than 8 percent of annual assaults.

These are the things that will reduce the instances of campus rape, not a sex strike.