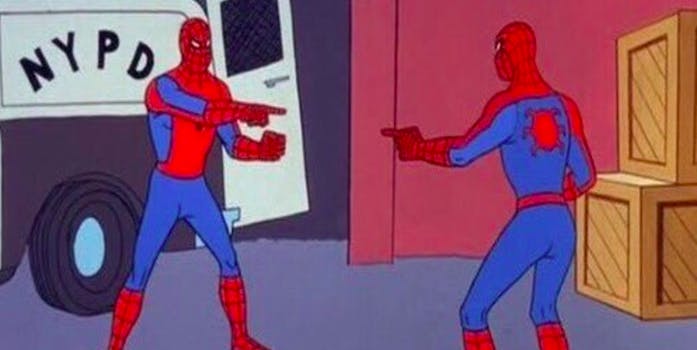 The internet loves them.

Long before the internet laughed in unison at the genuinely horrific Spider-Man: Homecoming movie poster and the fact that a nerdy, white kid is no longer the underdog in America, the funniest thing about the fictional web slinger were the bizarre screenshots create from the 1967 animated television series.

Also known as “Retro Spider-Man,” the ’60s Spiderman meme spawned from the Spider-Man‘s amateurish animation style and blatant lifting of entire stills and scenes from other cartoons of the time.

But how did a cartoon that ran for just a few years in the late 1960s become such an internet meme darling? Here are some facts about Spider-Man ’67 the show, the emergence of the Retro Spider-Man meme, and just how far people will go in entertainment to save a buck.

In 2014, Marvel and Netflix inked a deal for four B-level heroes to each get a TV series. The deal was worth a reported $200 million. No offense to Daredevil, Iron Fist, Jessica Jones, or Luke Cage, but those four names combined aren’t as universally recognized as Spider-Man, especially not back in 1967.

In that era, production values, even for the cartoon, were considerably cheaper than today’s average cost of a superhero series. But even factoring that in, Marvel, Grantray-Lawrence Animation, and then Krantz Films spent very little money producing the Saturday morning kid’s show.

Based on the Spider-Man comic book series created by Stan Lee and designed by artist Steve Ditko, Spider-Man ’67 was jointly produced in Canada and the United States. The Grantray-Lawrence company, as mentioned earlier, provided the animation in season one while a Canadian company supplied the voiceover talent.

The first season stayed true to the comic series, thanks to Stan Lee overseeing production, but the second and third seasons went off the rails and in response to a tightened budget for a show already cheaped out on production values.

For the second season, Marvel turned to veteran cartoon creator Ralph Bakshi. At the helm during the final two seasons of Spider-Man ’67, Bakshi stripped the show of almost every recognizable villain from the comic book in a “cost-cutting measure” and replaced fan favorites like the Green Goblin and Doc Ock with generic, green-skinned monsters and strange new foes like Kotep, the Scarlet Sorcerer. The producer lifted most of the monster footage from another series he was producing at the time, Rocket Robin Hood. Rocket Robin Hood was about Robin Hood, in space. The drugs in the 1960s must have been something.

While Bakshi’s lifting from other shows is creatively lazy, the penny-pinching in Spider-Man ’67 began from the first fictional web shot. The show’s tight budget meant cutting corners. For example, Spider-Man’s costume is webbed only on his head, arms and boots, the show repeatedly reused stock animation of Spider-Man swinging across the New York City and of Peter Parker ripping off his white dress shirt to reveal his spider suit beneath.

The funniest gaffe in the name of thriftiness came at the expense of Spider-Man’s costume. In season one, the spider on Peter Parker’s suit had only six legs. This error was corrected by season two but occasionally popped up when reusing animation from season one. Instead of reshooting footage with the corrected spider, the spider on the Wall Crawler’s gear just kept gaining and losing limbs.

The oddest decision made in the name of making money involved the characters odd choices to stand completely still in almost every situation, even in the face of pending doom. These statue-like reactions eventually led to the Spider-Man meme we all recognize today.

The Spider-Man ’67 meme originated on 4chan around 2009. Moderators of the board /co/ (cartoon) invited others to online watch parties that culminated with users submitted their favorite odd screenshot from each particular episode.

One of the most popular threads, titled “Spider-man on his day off,” contained over 200 posts featuring images of Spider-Man from the 1967 series with hilarious captions similar to LOLcat. The meme took off from there and infiltrated other social sharing sites like Tumblr, Reddit, and Pinterest.

The original series ran from September 9, 1967, to June 14, 1970. In the end, the miserly ways of Bakshi led to the renewed popularity of the show. ABC Family reaired the show as part of the network’s Memorial Day weekend-long “Spidey-Mania” marathon to coincide with the original Spider-Man film in 2002 and did the same in 2004 for the theatrical release of Spider-Man 2. Episodes have occasionally popped up on the official Marvel website and around YouTube.

Bakshi himself would go on to produce several adult-themed cartoons and his debut feature film, Fritz the Cat, was the first animated film to receive an X rating from the Motion Picture Association of America and it became one of the most successful independent animated feature of all time.

But it’s the Spider-Man screenshots that live on forever.