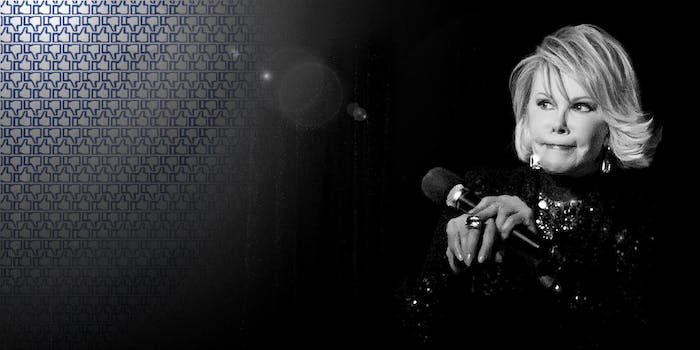 How to speak ill of Joan Rivers on Facebook

If you're going to dance on her grave, do it with tact.

In college, a friend of mine married a man I didn’t much like, and shortly thereafter, that man was murdered. Because I didn’t much like him and because his widow was no longer a close friend, the event did not evoke much special feeling in me. There was an abstract sense that death, especially young and especially violent, is a tragedy, of course, and that none of his character flaws as I perceived them were deserving of an execution. However, because I did not feel acutely wounded and because I did not want to contrive some kinder image after death, I did not attend the funeral. I did not sit quietly mourning in my room. I did not visit with the widow and cry. I did not offer my reflections in public or in private. I did not partake in grief because I had no grief to offer.

These were all internal acts and the most important thing I did not do was relate them externally. I did not say I didn’t like the guy, I said nothing. I didn’t say why I wasn’t at the funeral, or why I wasn’t crying—I only didn’t do these things. I did not protest that people “expected me to care,” because they didn’t. I was far from the minds of the pallbearers and nothing in their pain required me to speak well or ill of the departed. A simpler way of putting it: the only expectation was that I not be an asshole. Even this was implicit—the mourning were not thinking about me.

It takes a peculiar kind of narcissism to imagine that mere proximity to an event compels a response—as if you cannot sometimes be silent and the world would not be complete without your verdict. Blame social media’s endless appetite for commentary if you like, but that’s only the megaphone for broadcasting the bad habit. The impulse comes first and it had an especially egregious airing on the day of Joan Rivers’ death.

It took less than an hour. I know because I happened to be procrastinating when the news broke, in those odd few minutes between the first rumors and final confirmation from the Associated Press, when the Internet holds still and waits to see whether its got a tragedy or a hoax. (We had a case of each that day: Joan Rivers was really dead. Betty White was not.)

So I remember precisely when the news broke, and I remember that it was less than an hour before the straight signal boosts and quickly cobbled tributes were interrupted by a stream of commenters unable to resist the impulse to register their dissent. The extremity of sentiment varied, but the essence was the same: Joan Rivers was a bad person; I don’t know why I’m expected to care; I’m neutral or even (with some of them) happy that she’s died.

It isn’t that they were wrong. Setting aside that she was nowhere even near the running for “worst person ever” (or even of the recently deceased), Joan Rivers was deeply flawed. Her sins were entirely verbal, but she had too much clout to make them harmless. I won’t recite the litany right now. Suffice it to say, she said enough to transgress every sacred pillar of the Left, not always in a tone we can rightfully consider “kidding,” and there is a credible case to be made that she was at times a racist, transphobic homophobe and a fairly bad feminist to boot.

I don’t write in order to valorize the woman. But it bothers me that it only took an hour. What is accomplished by a snarky celebration of her passing before the body is even in the ground? When her family, and more immediately her fans, are not even yet sufficiently past shock to begin mourning? Do we imagine they want to hear about how terrible she was right now, or that hearing it, they might say, “You’re right. Forget the funeral. I’m glad she’s dead, too?”

How soon is too soon to begin speaking ill of the dead? A number of her detractors have pointed out to me that Rivers, beyond her general sins against social justice, was especially insensitive to that line. “She would make terrible cracks about people as soon as the doctors called a time of death,” they say. “Why do we owe her any better?” Maybe. But it seems strange to argue that Rivers was reprehensible in the same instant that you just barely clear the moral bar you say she set too low.

Of course, the more common pushback isn’t about bars, precisely; rather, I have been told that the day of Rivers’ death—as she is being celebrated for the final time—is not just permissible but the best time to remind the teary-eyed of her transgressions. “We shouldn’t lie about people, even if they’re gone,” they say. “She didn’t have to act the way she did, and it would be dishonest of us to pretend we loved her unconditionally.”

Yet nobody is asking these people to lie. Nobody is waiting behind the screen, clicking refresh every minute, to see what they have to say about Joan Rivers. Nobody is expecting them to care, and nobody—certainly not me—is expecting them to feel anything at all that they don’t feel. Staying silent for a single day does not constitute a failure to speak out. It does no injury to the world. Perhaps rushing to post against the tide of popular opinion is some small part of bravery, but the better part of decency is restraint.

I don’t know how soon is too soon. I don’t expect a week, or even a weekend. But is a day too much? Even an hour?

Joan Rivers’ legacy should be complicated. She should not be remembered as a saint, but all of future time exists for this critique. Every day since Thursday has been one more measure of distance between the narcissism of contradicting the bereaved and the thoughtful, reflective consideration that should be offered when the dust has cleared. We come to bury Rivers, not to praise her. We respectfully request the silence of the crowd during the internment and eulogy. When we’ve gone and if you must, feel free to begin dancing on the grave.