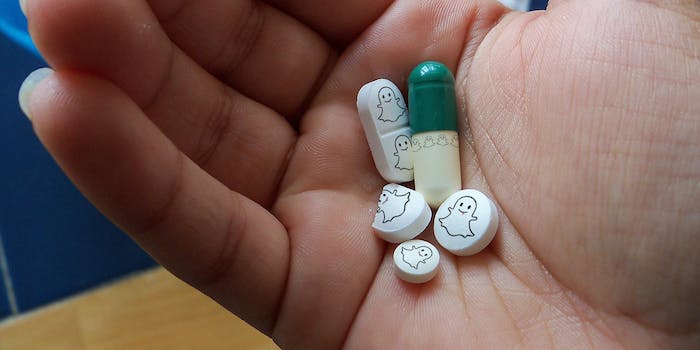 The ‘Snapchat drug’ is real, and it’s sending people to the hospital

"These people appeared to become aggressive and disoriented."

These Snapchat-branded pills won’t make you self-destruct—but they will make you really sick.

At least four people in Australia were hospitalized this week after each taking half a tablet of a new drug called “Snapchat,” named after the popular photo-sharing app that allows people to set a self-destruct timer on shared images and videos.

“Police received a number of reports last night of people behaving in an erratic and irrational manner,” Drug and Organised Crime Division Superintendent Clint Sims told the Daily Telegraph. “These people appeared to become aggressive and disoriented after ingesting the drug and were taken to Royal Darwin Hospital.”

A night-shift supervisor at the Royal Darwin Hospital, located in the Northern Territory of Australia, confirmed with the Daily Dot that the Snapchat drug was real. She would not elaborate on the medical conditions of any of the patients admitted.

The Snapchat drugs reportedly come in two colors: pink and blue with green speckles. Little else is known about the drug.

In April, a Scottish man was hospitalized after popping ecstasy tablets featuring the Bitcoin logo. The man was found in an agitated state.

These Bitcoin-branded drugs appeared on the underground drug market in November and have since become a bit of a European phenomenon, with online reviews of the drug posted from the Netherlands, U.K., and Switzerland.

So far, no such review exists for Snapchat on PillReports, a popular illegal drug review website. And if the pills are as dangerous as people claim, no such reviews may ever show up.

“I have seen two full-grown, heavy-set men taken to hospital last night due to ingesting these,” one person told told the Telegraph. “I know for a fact that a lot of these have been sold throughout Darwin [the capital of Australia’s Northern Territory]. I really need a wide exposure warning put up about these. People will die this weekend if something isn’t said.”