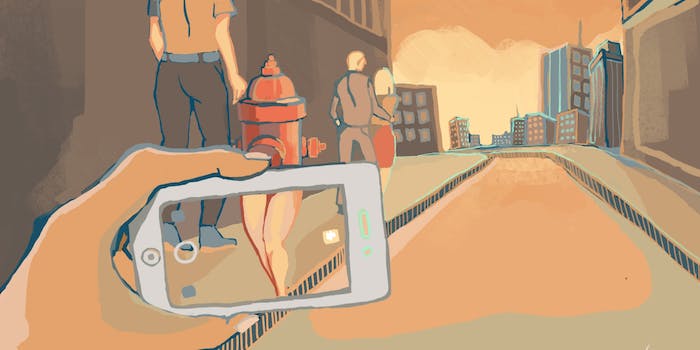 I became a Snapchat celebrity by catcalling fire hydrants

What started as a silly joke become altogether serious.

Most mornings, I take a photo of a fire hydrant. It can be any fire hydrant—the one outside my apartment in Brooklyn is a frequent subject—but in my travels, I’ve showcased specimens as far-flung as Montreal and San Diego. Sometimes I put myself in the picture by doing an awkward-white-guy rap squat while I rip a selfie. Usually, though, the hydrant stands alone.

Once I’ve wasted enough time getting a suitable image, I add the caption “Damn girl,” then upload the whole thing as a Snapchat story. Through the app, thousands of viewers around the world will see my fire hydrant by the time the image expires 24 hours later. Mostly I do this because it makes me laugh. But I also put photos of fire hydrants on Snapchat because catcalling sucks, and I want my followers to talk about it.

You may remember when the thinkpiecing Internet was inflamed by this viral video about the sexual harassment one woman experienced walking around New York. Unfortunately, the video’s creators made editing choices that (intentionally or not) cast the behavior as a specific proclivity of men of color, which made it problematic for all the reasons Lindy West explored on this very website. But while its irresponsible treatment of class and race may be its Internet legacy, the video’s intended commentary on catcalling—that it happens a lot, and sucks a lot—made something click for me.

On Snapchat, I “host” a “morning show.” (I put those terms in scare quotes because the show is basically just me talking into the forward-facing camera of my iPhone as I walk to the subway, and I don’t want to come off any more self-impressed than I already do.) That’s where I upload my hydrants. Since I began this ritual, I have become “big on Snapchat,” and this meme is my calling card. I get viewers—dozens, sometimes a hundred a day—asking me what it means.

Since I began this ritual, I have become “big on Snapchat,” and this meme is my calling card. I get viewers—dozens, sometimes a hundred a day—asking me what it means.

This demand for substance is a peculiar reflex that permeates the Snapchat world, but my practice of heckling a fire hydrant had no substance. I just did it because it was silly and weird. Yet after I saw that catcalling video—which features men crooning at an actual woman again and again—I asked my girlfriend, female coworkers, and Twitter friends about the phenomenon. This doesn’t really still happen, does it?

Their responses made me feel pretty ignorant. Every day. It happens every day. Woof. My revelation was similar that of Aziz Ansari’s male audience members when faced with a room full of women acknowledging that they’ve all been stalked. How is this possibly still a thing?

After this reality check, my farcical hydrant routine seemed more loaded. My viewers were still clamoring to hear what it was all about. WHEN WILL YOU EXPLAIN THE HYDRANT??!! they wailed at me via direct snaps. It’s because the valves look like boobs, right?? Because I had never cared to assign meaning to my inside joke (with… myself), it was growing into a vessel of misinterpretation and misogyny all its own. I didn’t want that.

So I set a date and promised to reveal the true meaning of the “Damn girl” meme to my Snapchat audience. When the day arrived, I told them a condensed version of this same story—that it started as a preposterous little gag deliberately without meaning; that I was embarrassed by my own ignorance and privilege when I realized how frequently men actually stoop to catcalling women; that I felt like my amoral/humorous intent was at risk of having an immoral/misogynistic impact. I kept it light and fun because, well, it’s Snapchat. But I also made sure to drive home a clear message:

I felt like my amoral/humorous intent was at risk of having an immoral/misogynistic impact.

Catcalling a fire hydrant seems ridiculous until you realize that guys do the same thing to girls all the time. This is a surreal joke that sadly represents a reality for many people. Respect women. Also, no: it’s not because the valves look like boobs. They don’t. Just… don’t be a jerk.

I honestly thought it was the last time most followers would open my Snapchats. My stories are a grab-bag of observational humor and slapstick physical comedy. Viewers don’t want to hear preaching; they’re trying to escape for a moment before returning to their busy days. But I figured this was a worthwhile way to conclude my 15 minutes of quasi-celebrity. It’s Snapchat, I reminded myself. Who cares?

I meet a lot of people who think that Snapchat is a “just” platform for hormone-addled teens to sling flesh at each other by the pixel. I find this funny. Not because it’s inaccurate—I’m sure a non-negligible fraction of the app’s alleged 400 million daily snaps are still nudes, even after CEO Evan Spiegel’s tireless efforts to cast his bottled lightning as the Next Big Thing in Media. And 50 percent of its users are between the ages of 13 and 25, so it’s true that the platform skews young. No, I find it funny because while Snapchat is inextricably linked to its sordid, shadowy beginnings, it’s also the social media platform where I’ve found young people the most willing and able to have healthy conversations about tough topics like sexism.

After I posted my story about the hydrants, I received a deluge of direct snaps in response. I’m never able to open all the snaps I get, but normally I’m able to keep my head above water. Not this time. Thousands of viewers were snapping me simultaneously. I probably opened a few hundred snaps that day, and many of them were from the standard subhuman trolls you find around the Internet. But many, many more were from teenagers—of both genders—asking frank questions about catcalling and telling me anecdotes of their own experiences as victims. In some cases, male viewers told me they used to catcall girls at school because they thought it was harmless. The “Damn girl” story sparked all these little dialogues, and I spent most of my day and night on Snapchat participating in them.

This outcome helped me recognize Snapchat’s little-cited, immensely powerful ability to engender honest, civil discussion. The ephemeral, one-on-one communication facilitates an intimacy that initially appealed to sexters, and those same parameters are empowering teenagers who normally lack the self-confidence or strength of voice to express themselves without fear of being judged by their peers.

In that way, Snapchat is unique. Tweets can be trolled. Instagram comments are littered with hate-speech. Comment sections on websites are notorious hangouts for discourse-squashing monsters who silence genuinely interested contributors by screaming heinous opinions IN ALL CAPS! Facebook is… well, Facebook: a place for your high-school nemesis to post pictures of his baby and haggle mindlessly about #Benghazi.

Snapchat, on the other hand, is just you and the person you’re snapping with. There’s no comment section. No third party can retweet your thoughts, strip away context, and make you a target of the Internet’s hive mind. There’s no jeering crowd to encourage a troll’s viciousness. There’s just a simple, face-to-face interaction with someone on the other side of the screen. When you’re talking to an audience of one, and the conversation is going to disappear, you can let your guard down. You can trust a stranger not to use your opinions against you. It was possible, briefly, for my followers to discuss their experience with catcalling in a safe forum.

When you’re talking to an audience of one, and the conversation is going to disappear, you can let your guard down.

The moral of the story: A straight white man singlehandedly solved sexism with Snapchat and fire hydrants. What a happy ending! We can all go home now! Just kidding: There’s still systemic gender inequality (and general inequality, for that matter) to be found at every level of society. I haven’t “fixed” anything, hydrants or otherwise. There’s a colossal amount of real work to be done in order to achieve gender equality, and I’m determined to be a better ally to those who do it. But that’s not what this story is about.

No, the moral is that it’s possible to have meaningful conversations on Snapchat. People are willing to put themselves out there with the reasonable expectation that they won’t be blindsided by bullies and trolls when they open up. It gives insecure teens a safe outlet for their thoughts. Whether it’s misogyny, racism, obesity, sexuality, or just the upsetting minutiae of everyday life, Snapchat is a perfect place to talk about it.

I realize that’s a heady claim, but I believe it because I’ve seen it firsthand. And to think: it was all because I thought it was funny to objectify a fire hydrant. Damn, girl.

Dave Infante is a writer for Thrillist. He goes by DINFONTAY on Snapchat. Follow him there, or on Twitter.