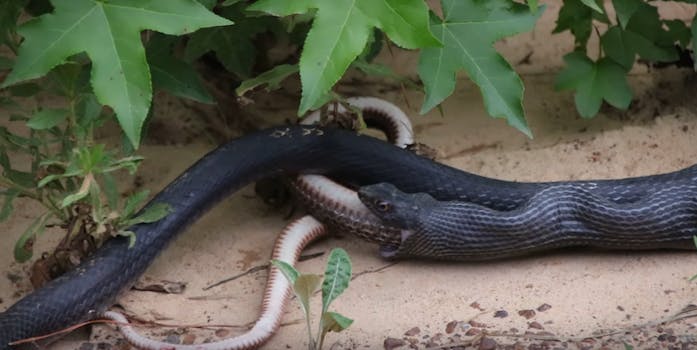 Snake vomiting other snake is the stuff of nightmares

Snakes are horrifying enough without adding this nonsense.

You might not have heard the name, but you’ve probably seen the Ouroboros before. It’s an ancient symbol showing a snake or dragon devouring its own tail. It’s usually used to symbolize the link between creation and destruction and the eternal cycle of life and death.

It also makes a badass tattoo.

But what does it mean when a snake eats another snake, then gets scared and pukes up the second snake, which is somehow still alive? Maybe the eternal struggle between being horrified and fascinated?

Apparently, this kind of thing isn’t all that uncommon. Sara Ruane, a snake expert and assistant professor at Rutgers University told Gizmodo that not only do snakes often eat each other, they will also, as the man in the video points out, regurgitate a meal if they feel threatened.

“As soon as that snake throws it up it takes off,” she said. “Now it doesn’t have this other snake weighing it down.”

Keep that in mind next time you’re running late for a bus.

Ruane identified the larger snake as a coachwhip. It’s species that is neither venomous nor a constrictor, but just basically bites stuff and then swallows it. The other snake was probably a smaller coachwhip or a racer of some kind.

Regardless of how common an occurrence this might be, the video is still the stuff of nightmares. One snake lost his lunch, another almost briefly was lunch, and we all watched it happen.

Clearly a traumatic day for everyone involved.