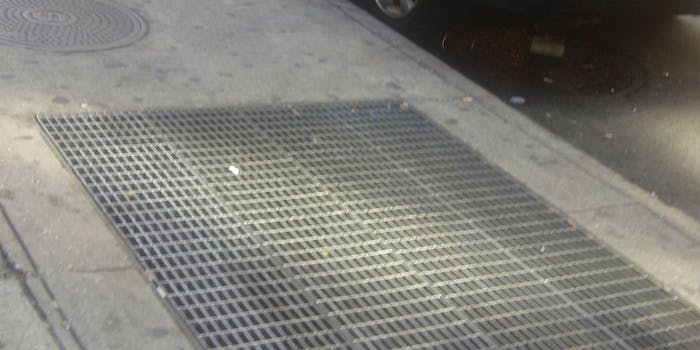 Police still aren't sure how the perpetrator accessed a sidewalk grate from underground.

Diners at Bar Pitti in Greenwich Village on Friday night may be writing unusual reviews of the restaurant’s atmosphere after their meal was interrupted by a smoke bomb. A man emerged from underground using a sidewalk grate shortly before 6:00pm that night and threw the device into the restaurant, leading to a ruckus that eventually brought almost seventy police officers to the scene.

After the man, who is still at large, threw the bomb inside, a restaurant employee grabbed it and threw it back outside, according to the restaurant’s manager. The restaurant immediately became filled with red smoke. No one was hurt, but CBS 2 reported that “as many as 65 police officers” and members of the NYPD’s bomb squad arrived to investigate the event.

Charmed actress Rose McGowan, who was eating at the restaurant when the bomb went off, tweeted that her eyes were burning.

Someone just threw two red smoke bombs into the restaurant I was eating in. Eyes are burning. #NYCWHAT

The Daily Mail has a photo of the aftermath showing red smoke drifting up from Bar Pitti’s yellow awnings. NBC News 4 New York reports that the perpetrator, who was wearing a baseball cap, climbing onto the street out of a grate in the sidewalk. After he throws the device, he returns underground. Surveillance video shows the restaurant filling up with smoke.

According to NBC 4, “Police haven’t said how they think the man was able to get underground and up through the grate.”