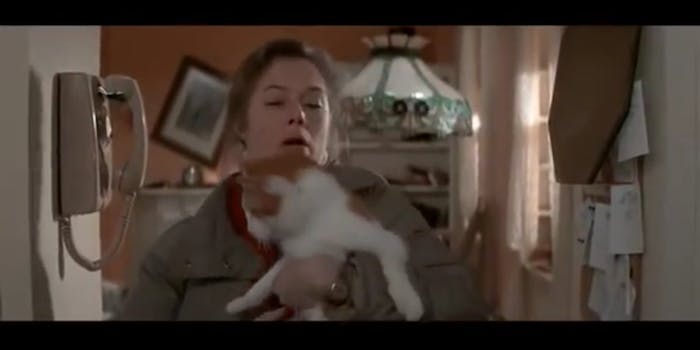 As Halloween approaches, certain horror movie tropes tend to come out of the shadows. Supercut fanatics Slacktory just assembled a hyper-edit of one of the genre’s most puzzling themes: people being frightened by cats.

With the exception of, say, Cujo and The Thing, dogs aren’t often behind horror movie scares. Perhaps it’s the indifferent feline disposition that makes them so diabolical. After watching this supercut, it’s hard to believe that so many cats could be trained to scare on cue. If you’re a cat owner, you know they do what they want, when they want.

But, as Slacktory suggests, “[i]f a TV or film character is creeping around a spooky place, they will get scared by a cat.” And their cut isn’t all horror movies: In addition to go-tos like Alien, Pet Sematary, and The Amityville Horror, they’ve also included clips from The X-Files, Star Trek, and the Community episode that spoofs the people-being-pelted-with-cats trope.

After watching the supercut, one thing stands out: All the cats have the same yowl. Is there a cat voice actor making royalties off these movies?