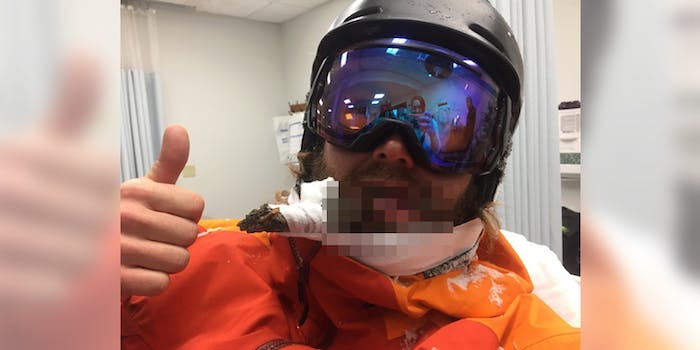 This is what a stick to the face looks like.

A lot of normal, rational humans would be quite bothered by getting a big ol’ stick right through their face. With good reason! Stick through the face isn’t a naturally occurring phenomenon.

But Natty Hagood isn’t a regular dude (did the name give it away?). When he got a stick through the face, he posed for pictures with his thumbs up.

The 29-year-old ski instructor was zipping down the slopes in Jackson Hole, Wyoming, when, in his own words, he “cut it a little too close to a tree while skiing.”

Bam. Stick to the face.

Be forewarned, the pictures are kinda gross. But what’s not is Hagood’s enthusiasm. That is downright inspiring.

Hagood was as hella chill when it happened on the slopes as he was in the hospital. From the Idaho State Journal:

“I thought maybe my chinstrap got pushed up into my face, so I tried to brush it off and that’s when I felt the stick,” he said. “So, I shook left to right and saw the stick moving in my peripherals. I reached out and grabbed it and wiggled it before realizing it was pretty far in there.”

That was when Hagood had his first aha-moment. He said, “Holy crap, I just got impaled. And then I yelled over to Pete, ‘Hey look I got a new piercing.’”

That is chill as hell.

Doctors were able to remove the stick and patch his lip just fine. The shot of local anesthesia, he said, was the most painful part of the entire experience.

Hagood had health insurance, but as many young folks do, he also had an extremely high deductible of $1,250.

He set up a GoFundMe and quickly reached his goal. Hagood is now back to drinking beer, albeit through a straw.

Give the whole article about his experience a read here. Hagood is even more dope than he looks.