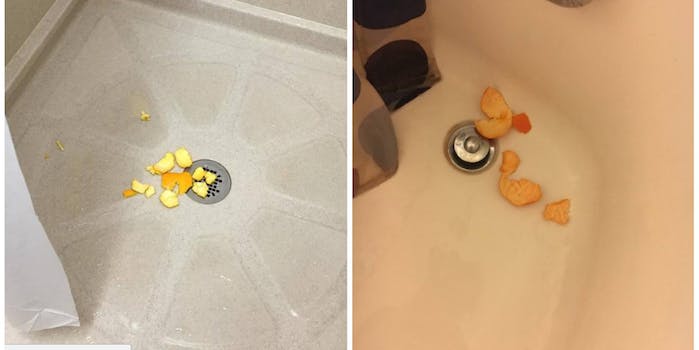 Move over shower beers, Shower Oranges are in

Eat orange, rinse. Repeat whenever your Vitamin C gets low or your B.O. gets high.

Some of the best foods are also the messiest. It’s almost impossible to devour a rack of ribs or a plate of wings without your face becoming a saucy, dripping mess.

And your enjoyment of those foods would surely suffer if you ate them standing up in your shower. Also, it would be weird.

However, if you have a really messy snack, one that can be consumed anywhere, why wouldn’t you eat it in the shower, because when you’re finished, you can just rinse right off?

Almost makes too much sense not to, right?

That’s what the people behind ShowerOrange are thinking.

Take an orange, eat it in the shower, then rinse when done.

The concept arose out of a redditor’s response to a site-wide query about “what’s something unconventional everyone should try.”

He said “PHOTON_BANDIT, would you like to know the most liberating, carnal, and best feel good thing you can ever experience is?”
Of course I said yes.
“Have you ever eaten a orange in the shower?”
“no… no i havent”
“Well just think about it PHOTON_BANDIT. Tearing apart a cold fresh orange with your bare hands, just letting the juices run over your body. Not worrying if your going to get sticky, or anything. Just ripping it in half, and tearing into it with your teeth like a savage cannibal who hasnt eaten in a week! Yes PHOTON_BANDIT, this is the most carnal, ferocious, liberating thing a man can do”
And from that day forward, I start my mornings with an orange in the shower.

A subreddit was launched and a movement began.

Shower Orange. Never in my life have I felt so liberated as I do now

Everyone who has tried it has raved about the carnal experience.

“It’s about the contrast between the hot water and a cold orange. To let yourself eat an orange without fear of becoming covered on the juices [sic]. It’s to let yourself be free,” said pies765.

Men’s Health even gave it a shot and declared it animalistic pleasure unlike any other.

Bury your face in that orange. Be feral, be visceral, let that id loose. Let the cold juice run down your chin and into your chest. Let the juice and pulp and pips get everywhere. Use your teeth to scrape the sections out of the hollow as you press the peel into your face.
It’s the most primal part of your day, the best opportunity for letting the ancient preverbal part of you out to run around, before it’s time to knot it up behind a tie and send it out in public again. You will, inevitably and willingly, force your evolution to social animal. But all that day you’ll retain a taste of that morning, the juice running in rivulets down the chest, the essence of orange rising in the mist.

There’s really only one rule to Shower Orange-ing, delineated by the group’s mods.

No grapefruits. We have strict rules regarding which fruits are suitable in this subreddit. Oranges, Clementines, tangerines, Blood Oranges are all acceptable. If I am forgetting anything that should be accepted feel free to to message the mods and we will review if it should be added to the list of acceptable shower orange fruits.

Seems easy enough to abide by.

It’s rare that you find something on the internet that is entirely and completely benign and benevolent. But this may be it. You can do this without having to worry about Slate running a “Why Shower Oranges Are Bad,” thinkpiece or have it turn out that the concept of Shower Oranges originated from a neo-Nazi forum.

You can also completely ignore this and never have the thought cross your mind ever again.

Although it does seem oddly tempting to try.