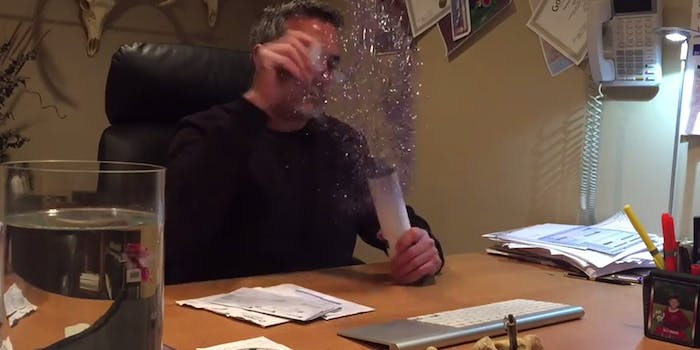 This is how much a glitter bomb ruins your day.

This week, we heard all about the service Ship Your Enemies Glitter, which sends a discreet envelope to rain sparkly hell on someone who deserves a fate worse than death. But what’s it like to actually open one? No one knows!

UNTIL NOW. This is how much a glitter bomb actually ruins your day.

No, it’s not from Ship Your Enemies Glitter—that service has issued a warning to potential customers, telling them to stop placing orders. This gift, sent from a son to his father, is from prank site RuinDays.com.

We at RuinDays.com believe that anyone that has ever wronged you should pay. Glitter is the worst creation of mankind. It gets fucking everywhere and is extremely frustrating. Poop also sucks. We discreetly and anonymously package the most annoying things possible to receive through mail and ship them to your worst enemies, in an effort to ruin their day.

From the product description:

The envelope is not going to cut it. You really want this person to suffer so you’re sending them a spring loaded tube with double the glitter that will ensure total glitterstruction upon opening.