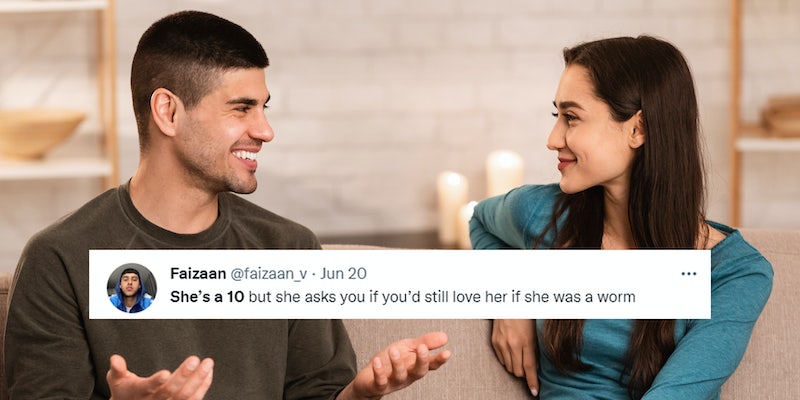 How a casual rating game became a self-deprecating meme.

A meme format that started off as a rating game on TikTok has spread to Twitter and become a self-deprecating meme.

The “She’s a 10 but ____” meme format apparently started on TikTok, where it was framed more as a challenge or a game with low-stakes ratings. A May 31 TikTok from Leah Woods appears to be the origin, though she and her friends were rating theoretical men. It has more than 1.4 million views.

Predictably, it’s already been ruined by guys using it for misogynistic purposes. The hashtag #shesa10 has more than 10 million views.

Tell me I’m wrong tho…

It then spread to Twitter, where people got a little more creative. Some jokes were self-promotional, some were self-deprecating. Others referenced TV or movie storylines. And there was still misogyny.

Woods now has “creator of the ‘he’s a 10 but’ game” in her TikTok bio, and posted a response to the meme trending on Twitter yesterday. We reached out to Woods for comment via email.

Update 1:35pm CT, June 22: Woods responded to the Daily Dot, stating that “it was very interesting to see how the game grew, and how at the beginning there were tons of comments from guys saying that it was a sexist game because if men were to do it they would get lots of hate in their comments. I actually made a video early on addressing that, since I completely disagreed.”

She adds that the trend is now on Instagram, where people are “making memes of it and filters with it, which is all just crazy seeing how big it’s gotten.”