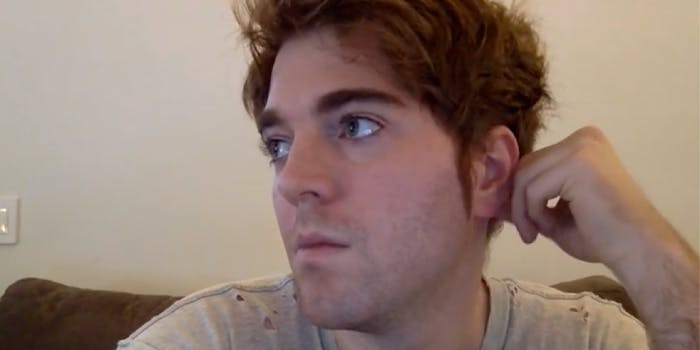 Dawson said his jokes were edited out of context.

Shane Dawson came under fire Wednesday for an old podcast where he jokes about pedophilia and underage girls. Dawson, a longtime YouTuber who has millions of subscribers and has parlayed his success on the site into a couple of feature films, denies accusations that he’s a pedophile and apologized for making jokes about the topic.

The furor started with a YouTube video by Pop Blast titled “shane dawson is a pedophile. here’s the proof.”

Over ominous background music, the video recaps a handful of times Dawson has mentioned kids in questionable ways on YouTube, but it mostly relies on audio from a years-old episode of Dawson’s Shane and Friends podcast. In the clip, Dawson seems to be calling a 5- or 6-year-old Instagram model “sexy” and joking about Googling pictures of naked babies.

“She shows me her Instagrams which are, I don’t know if I’m allowed to say this, but she’s like … sexy,” he says in the clip from the old show.

The Pop Blast video made the rounds, and another YouTube star, Onision, posted commentary about it on the live video site Periscope.

“This video will make you unsubscribe from Shane Dawson,” Onision tweeted.

In his commentary, Onision claimed he had recently felt uneasy about what he called Dawson’s “weird relationship with children” but didn’t have anything that “sticks out” to base it on.

“I couldn’t call out Shane for being a pedo based on a feeling,” Onision added. “[But] you do not compare being attracted to people who cannot consent and compare that to something that isn’t a crime.”

Where the video “proof” against Dawson gets murky, though, is in the editing.

A little more than an hour after Onision’s tweet, Dawson posted his own video. He denied the accusations and asserted that the “proof” video took his “shitty jokes” out of context, with key lines removed to make them sound like serious statements.

He described the clips that are going around as “some shitty fucking jokes from six years ago on a podcast,” and apologized for making them. He said his character on YouTube from 2009-2013 was about shock value and would “say anything.”

He also apologized for some other comedy from the period that he was “not proud of,” including fat shaming and jokes about race.

The bulk of the video, though, was spent breaking down the alleged proof from Pop Blast’s accusation video. Dawson said the podcast episode at the center of the controversy was edited to remove the times he said “I’m just kidding!” about calling the young Instagram girl sexy and about Googling child nudity.

“Of course I didn’t Google naked babies!” he said in his response video.

Dawson said he was especially upset because the accusation video came out during a week when he helped a 13-year-old girl, a singer and musician named Sophie Pecora, expand her audience from 8,000 to more than 100,000. In the two videos he made about Pecora, he jokingly referred to her as his “daughter,” and even met up with her in person.

What should have been a heartwarming gesture ended up prompting Dawson’s accusers to make their claims.

“I’ve wanted to make this video for a while, but Shane’s new video series featuring ANOTHER young child he calls his ‘daughter’ pushed me over the edge,” Pop Blast wrote in its video description. “I won’t delete this video (it falls under fair use & research) until action is taken.”

Dawson called the video “defamation of character” and said he believes it’s illegal. He did not immediately respond to the Daily Dot’s request for comment.

Update Jan. 11, 7:44am ET: Pop Blast has removed its YouTube video accusing Dawson of pedophilia, and Onision has deleted his tweet.