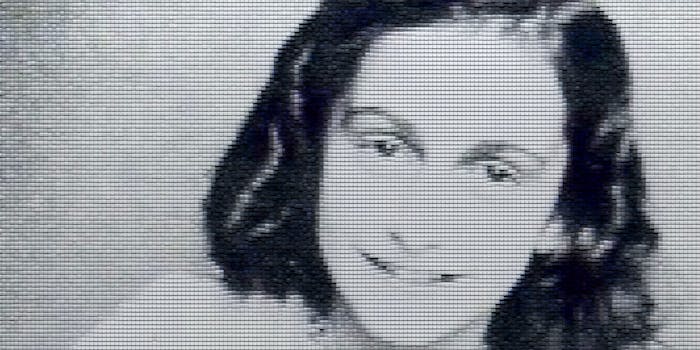 This sexy, flaxen-haired, decidedly non-Semitic lady is inappropriate to say the least.

If you read The Diary of Anne Frank in middle school, you’re probably familiar with the cover: a black-and-white photograph of its heroine, taken before she died at 15 in the Bergen-Belsen concentration camp. Some editions might feature some tasteful designs in lieu of a photograph, or an image of Diary of Anne Frank film star Millie Perkins.

What you probably wouldn’t expect to see is this image of this sexy, flaxen-haired, decidedly non-Semitic lady.

This cover is from a South Korean version that was released a few years ago, Kotaku reports. Judging by the denim jacket and loose pink blouse, it looks like it’s probably from the late 1980s or early 1990s. The costume isn’t even contemporaneous! Unless my understanding of European history is flawed and Dutch Jewish girls in the 1940s dressed like Geena Davis’s character in Earth Girls Are Easy.

She looks like a cross between a girl in a 1980s yogurt ad and one of Judy Blume’s more sexually adventurous YA heroines:

As you can see, the publisher had clearly never read The Diary of Anne Frank or even seen a Jewish person before. So one can only assume he saw the alternate title, The Diary of a Young Girl, and assumed it was some sort of sexual Bildungsroman (if you’ve read the unedited version of the book, you know that he’s actually kinda right; it’s just, ya know, not quite the main focus of the book).

The image, which is apparently quite real, has been floating around the Internet for years; it even comes up when you do a Google Image search on “diary of Anne Frank” in Korean. It might strike us Westerners as totally hilarious, but to be honest, it probably doesn’t reflect well on South Korean students’ grasp on 20th-century world history.