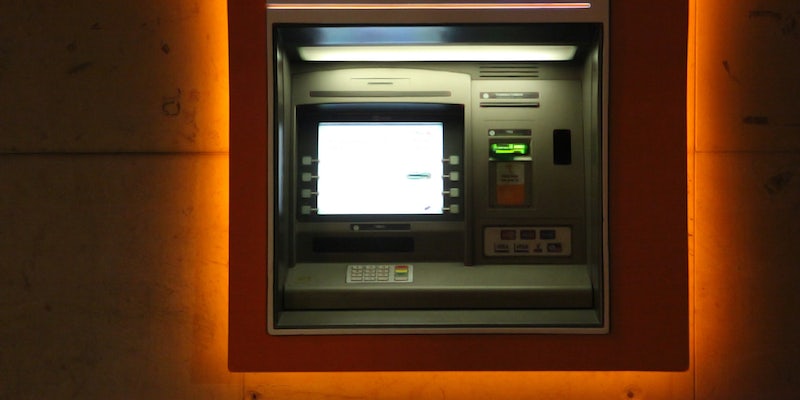 They inserted their card into the machine, and it just escalated from there.

Picture, if you will, the following scenario: You’re taking a midday stroll down your block, minding your own business and laughing at a joke you’ve remembered from the last episode of Louie, when you come across a naked couple having very vociferous, very public sex next to an ATM.

What do you do? Do you call the cops? Do you tap them on the shoulder and politely tell them to cease and desist? Do you shrug, unbuckle your belt, and join in? Or do you, perchance, derive inspiration from this iconic ditty, and take a selfie with them?

If you’re one of the strangers who stumbled on this Spanish couple in flagrante delicto, your answer was definitely, unapologetically, the latter.

The couple was busted earlier this week in the northern Spanish town of Oviedo, after cops came upon them furiously boinking next to a cash machine in a bank lobby, wearing nary a stitch on their trembling white bodies. (But they were still wearing socks, obviously, because they’re classy like that.)

Before the cops arrived, however, the couple was met with cheers and applause from outside bystanders, who had stopped to gawk at the couple from outside the bank window. Because why not, right? How often do you see people screwing in a bank, instead of just getting screwed? WHAM. POLITICAL COMMENTARY.

Many also took the opportunity to take some very, very NSFW selfies with the naked couple in the background, with the hashtag #cajerooviedo. (According to Google Translate, however, cajero doesn’t mean “OMG this couple is totally going to the bone zone next to an ATM, quick, Jorge, get out your phone and set your Instagram filter to ‘Brannan’ so it can be artsy and moody.” It just means “ATM.”)

Much like what happened with the equally elegant and sophisticated couple who got caught having sex next to a dumpster during a St. Patrick’s Day parade, the photos of the couple went viral, meaning they’ll forever be known as the two idiots who got caught vulcanizing the whoopie stick in the ham wallet next to an ATM. But all things considered, that’s probably a much less embarrassing legacy than being, for instance, Donald Sterling.