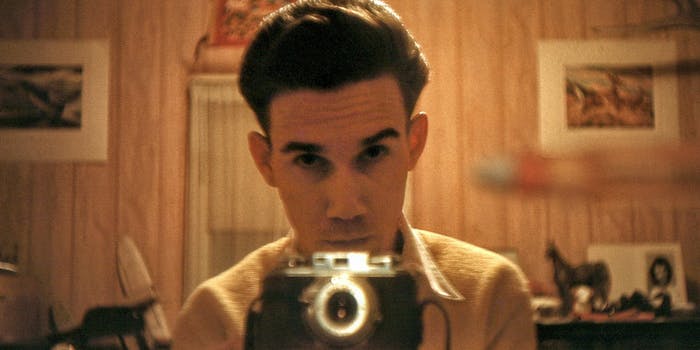 This grandfather’s selfie of his younger self is absolutely wonderful

Look at that head full of hair!

While those of us involved in social media know that selfies inundate our timelines in a never-ending conga line, people have always wanted to take photos of themselves. Sure, your grandparents (or the rock stars your grandparents hated) might not have had the ability to use a selfie stick, but mirrors have always been in fashion for self-portraits.

And the latest viral selfie on Imgur made wonderful use of a mirror, a camera on a tripod, and a dude from the 1940s with fantastic hair.

My Grandpa’s selfie circa late 1940’s

The original Reddit poster, robby792811, said that his grandfather, the young man in the picture, died last October and that he found this photo in a box of slides. The OP asked his grandmother about the origin of the photo, and she told him that the grandfather had snapped it when he was about 20 years old, before they started dating (they had been married for more than 60 years).

As one commenter pointed out, the grandpa looks like Psycho-era Anthony Perkins. That’s possible, I suppose. But multiple commenters were most impressed with the quality of the photo, and one said, “If you said this picture was taken today, I would believe you.”

Either way, this latest retro selfie definitely could join the ranks of all of the following pre-selfie selfies, taken by the likes of Paul McCartney, Stanley Kubrick, and James Joyce. Except grandpa’s hair might be better than any of them.