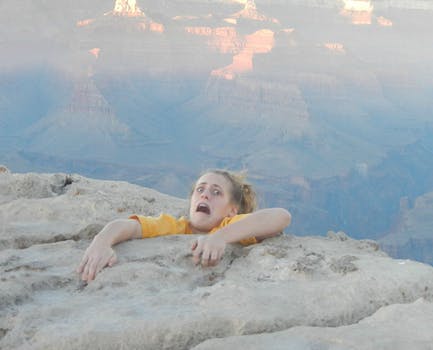 And she earned some serious Reddit karma in the process.

The Grand Canyon has claimed about 685 lives over the years, largely due to airplane crashes.

Another woman was almost added to list, or at least it appeared so from this photo by distressed Reddit user AlphaF.

The cleverly shot photo features AlphaF hanging off the side of the canyon in an attempt to freak her mom out on a recent trip. (She was apparently standing on something beneath her or has some amazing climbing skills.) The post reached the front page of social news site Reddit Thursday, where it collected 3,300 comments.

“Funny, yes. But when I visited the Grand Canyon, they were running search missions for a missing hiker (tent at campsite, but no one there for a long time),” DanN58 commented. “Never found him, as far as I know. But…they did find another unrelated body that fell off the Rim that no one knew was there. Grand Canyon can actually be a seriously dangerous place.”

The post also collected a handful of hilarious remixes. Here are some of the best ones so far.