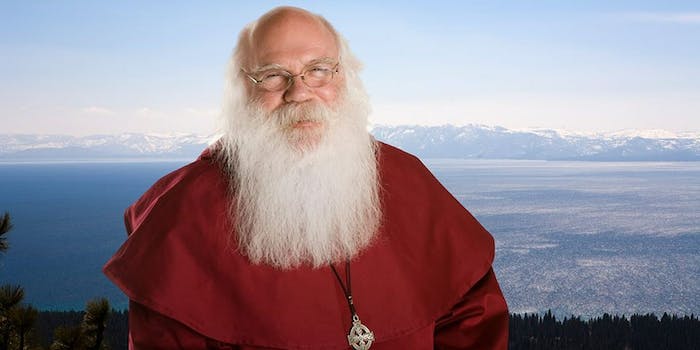 Ho ho honestly, it's time for a change from politics as usual.

He’s either a fantastic IRL troll or Father Christmas incarnate. Either way, Santa Claus is indeed running for office in the North Pole city council election—and his platform is focused on child welfare.

According to his website and Facebook page, Santa Claus (that’s his legal name) is a Christian monk and a child advocate who has been volunteering to help kids in need for over a decade. His website also notes, though, that he doesn’t respond to mail or messages from children asking for toys.

During today’s municipal election in North Pole, Alaska, Claus is asking residents of the Fairbanks suburb (pop. 2,117) to write him in as a candidate for city council.

In 2012, Claus announced his candidacy for president in a video posted to Facebook. In the video, the candidate—with smiling eyes and a white beard—bemoans America’s malfunctioning moral compass and “the devastation caused by government and corporate policies.”

“It is time to restore America’s heart and soul,” said Santa Claus in his 2012 presidential hopeful speech. “That’s done by creating a new climate of respect for one another: at home, in school, at work, in our communities, and in our nation.”

Claus has not yet announced a run for the 2016 presidential race, but seeing as he already appears to be the best candidate, one can still hope.

According to the Alaska Newsminer, Claus previously served as president of the North Pole Chamber of Commerce. The new city council seat is pretty much a sure thing—there’s a total of two write-in candidates expected to fill the two currently open seats.